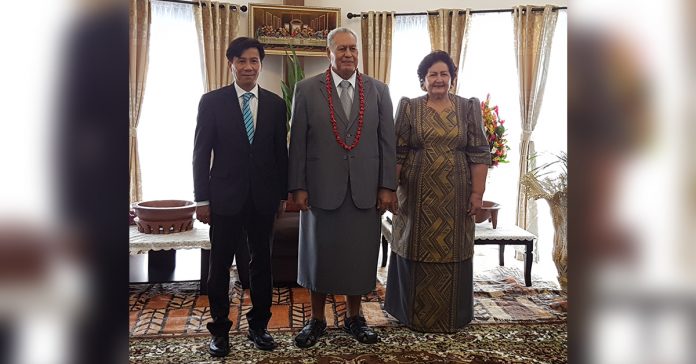 7 March, 2019 Apia Samoa. The Ambassador of the Socialist Republic of Vietnam to Samoa, H.E. Mr. Ta Van Thong who is based in New Zealand, arrived in Apia this week to present his Letters of Credence to the Head of State, His Highness, Tuimalealiifano Vaaletoa Sualauvi II. The Credentials Ceremony took place on Thursday this week, at the Office of His Highness the Head of State of Samoa in Vailele.

In his remarks during the Ceremony, the Ambassador reflected on the Government of Vietnam’s efforts to strengthen ties with Samoa through “cooperation especially in the areas of economic and trade, agriculture, fisheries, tourism and people to people links”.

Samoa formally established diplomatic relations with Vietnam in March 1994. Vietnam is the 15th most populous country in the world with an estimated 94.6 million inhabitants as of 2016. Vietnam is bordered by China to the north, Laos and Cambodia to the west, part of Thailand to the southwest, and the Philippines, Malaysia, and Indonesia across the South China Sea to the east and southeast. Its capital city has been Hanoi since the reunification of North and South Vietnam in 1976, while its most populous city is Ho Chi Minh City.

Samoa and Vietnam maintains cordial work relations through the United Nations, and other multilateral fora in the pursuit of issues of common interest and aspirations in maintaining prosperity, peace and security in our respective regions and beyond.

The Ambassador was received in audience by the Head of State of Samoa, His Highness Tuimalealiifano Vaaletoa Sualauvi II who accepted his Letters of Credence, as well as the Letters of Recall of his predecessor.

His Highness conveyed his best wishes for the President and people of the Socialist Republic of Vietnam. His Highness welcomed the possibilities for strengthening the relationship between both countries and encouraged continued collaboration on issues of mutual concern such as climate change, sustainable development, human rights, trade, and international peace and security.

Since April 2018, he has held the post of Ambassador Extraordinary and Plenipotentiary of Vietnam to New Zealand. Mr. Ta Van Thong has a Bachelor in International Relations and speaks both English and Russian.