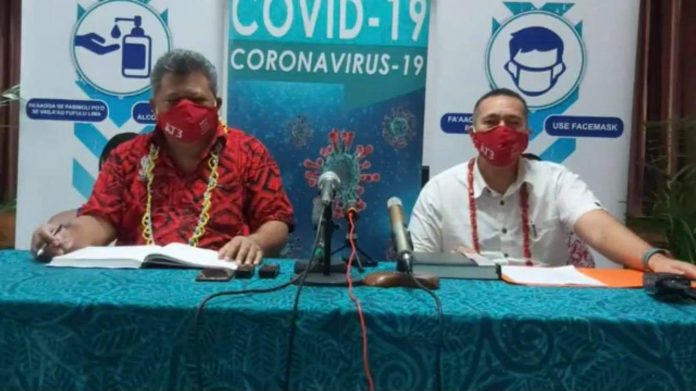 Samoa has registered it’s first official Covid-19 positive case since the global pandemic emerged out of Wuhan China in late 2019.

The community remains covid free however, with the 16 year old in managed isolation since he arrived on a repatriation flight on the 12th of February 2021.

Samoa’s tight processes for repatriation meant the young man was discovered positive at the border, and has been in controlled isolation since.

“The 16 year old boy is now considered to be our first positive case, with his two tests returning positive,” Agafili said.

Previous cases of repatriated citizens who returned positive results were historical cases; such as the 70 year old man and a sailor who had returned on one of the January flights.

In isolation at the Tupua Tamasese Meaole Hospital, Agafili says the boy remains healthy and shows no symptoms of the virus.

All other passengers who had returned on the same repatriation flight remain negative.

As explained by Dr Leausa, the 16 year old is returning weaker readings evident by a higher threshold cycle reading.

“The higher the threshold cycle, the lower the concentration of viral genetic material, associated with lower risk of infectivity;

“The young man’s positive reading has weakened.. for example, the threshold cycle was in the 30s, and in yesterday’s test, it has increased again, indicating a weaker reading,” said Leausa.

Director General of Health says strict protocols are in place including the isolation of health care workers who are in camp to provide round the clock monitoring of Samoa’s first case.

“He remains in isolation, monitored around the clock by a team of health care workers taking 8-hour shifts,” he added.

Leausa says there are dedicated teams that work in shifts, including the Doctor taking swabs, Laboratory Workers, Nurses, as well as personnel in the crucial area of Health Care Waste.

The sacrifice made by health care workers means they will remain in isolation for a further 2 to 3 weeks after the boy fully recovers.

“They are working in teams of four and remain isolated and unable to go home to their families,” said Leausa.

“He had requested if he could go for a walk outside but has been denied due to strict isolation and safety protocols,” says the Health Chief.

Samoa is still on Alert Level 1 (yellow) and NEOC Chair once again calls for the public to use face masks. He acknowledged the Ministry of Education for pushing this through schools so that our children can get used to it.

“Thanks to the Ministry of Education for pushing the use of face masks in schools and it’s a continuous lesson we should always remind our children, especially since the end of this pandemic is still uncertain”.