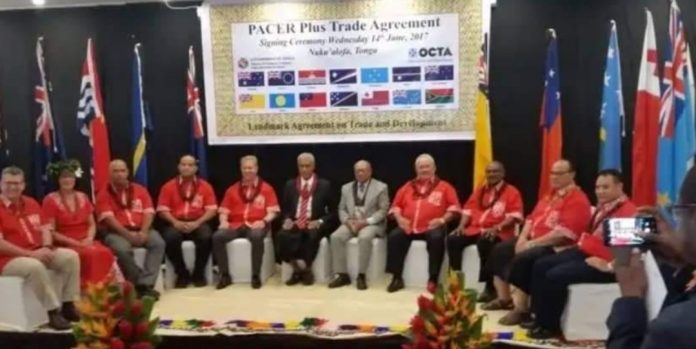 The Samoa Ministry of Foreign Affairs and Trade (MFAT) confirmed in a press release that “the Government of Samoa notified the PACER Plus Depository in Tonga on the 28 June 2019, of its commitment, as approved by Cabinet on the 8th of May 2019, to implement the obligations of the PACER Plus when the agreement enters into force,” reads the release.

PACER Plus will only enter into force after eight of the signatory countries step in to ratify.

The PACER Plus free trade agreement has been beset by criticism that it favours New Zealand and Australia, with the Pacific’s two largest economies, Fiji and Papua New Guinea refusing to sign.

Negotiations on PACER Plus started in 2009 and the Free Trade Agreement’s most vocal critic, New Zealand’s Professor Jane Kelsey has recently described it as “the worst example of a legacy deal” where “Australia and NZ foisted the agreement on Pacific Island Countries in a decade long process where final outcome makes a mockery of claims to be pro-development”.

The process in Samoa, however has taken a decade of work led by the National Working Committee on Trade Arrangements (NWCTA), comprised of senior representatives of government, private sector and civil society organisations.  The various stages in the lead up to Samoa’s ratification has been discussed and endorsed by the national committee.

According to the press release Samoa’s ratification “complements the parliamentary passage of the Customs Tariff Amendment Act 2019, legislating the use of the HS 2017 nomenclature and the Customs Amendment Regulations 2019”.

It also refers to the Customs (Rules of Origin for PACER Plus) Order 2019 that will soon be considered by Cabinet.

“Work continues to prepare for the implementation of the agreement through the PACER Plus Readiness Package. The Oceania Customs Organisation (OCO) is working with the Ministry of Customs and Revenue on customs – related capacity building. A national stakeholders’ workshop on customs provisions and rules of origin is planned to take place in the next few months.”

“Samoa’s portal is expected to be validated in October 2019.”

“The Government will engage with the private sector on innovative ways to capitalise on the opportunities to expand trade and investment for Samoa under PACER Plus, including through the support of the PACER Plus Implementing Arrangement for Development and Economic Cooperation.”