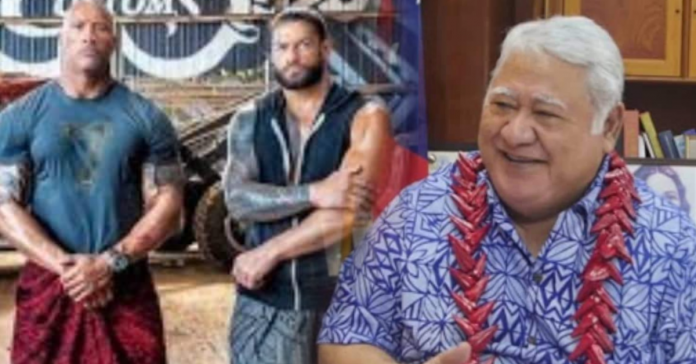 The Samoa Prime Minister has made a public statement to commend the efforts of Dwayne Johnson who holds the Samoan high chiefly title of “Seiuli”.

“We are extremely proud of your achievements and your latest blockbuster movie Hobbs & Shaw”.

“For a few seconds, Seiuli immortalised our country, our people and our Samoan identity on the silver screen;

“And for that Seiuli and all of the Samoan actors and actresses in the movie have more than earned the Government and People of Samoa’s approval and highest commendation,” said the Samoan Prime Minister.

Of particular applause from Prime Minister Tuilaepa is the inclusion of the Samoan haka and Seiuli’s war cry in the Samoan language that calls on his ancestors for strength.

“I take my hat off to Seiuli,” says the Prime Minister in his weekly radio program. “He deserves the recognition of the Government and People of Samoa.”

The Prime Minister also addressed critics that have commented publicly on the fluency of Dwayne Johnson’s Samoan in the movie.

The Prime Minister said that Samoa benefits immensely for Seiuli Dwayne Johnson’s inclusion of Samoa in the film, as well as through his speaking Samoan.

“The film brings Samoa to the world screen and spin-offs such as the tourism exposure is invaluable.”

The Prime Minister says it is wonderful to see Seiuli as a Samoan who is proud of his heritage.

And for Samoans like Seiuli, the contribution to Samoa will no longer go unnoticed by the Samoa Government, he reassured.

“The Samoan Government has approved a project to create a Register of Samoans residing worldwide”, says the Prime Minister.

It will acknowledge Samoans based overseas for their accomplishments and contributions to the welfare of the country.

“Our people residing overseas have achieved world class status in their fields of expertise such as in sports, politics, music and the arts,” says the Prime Minister.

“And Samoa’s footprints in Hollywood is the latest historical chapter,” he elaborated noting that he will relay Samoa’s appreciation to Seiuli.

The late Head of State, His Highness Malietoa Tanumafili II personally bestowed Dwayne Johnson with the Honorary chiefly title of “Seiuli” during Johnson’s visit to Samoa over 10 years ago.