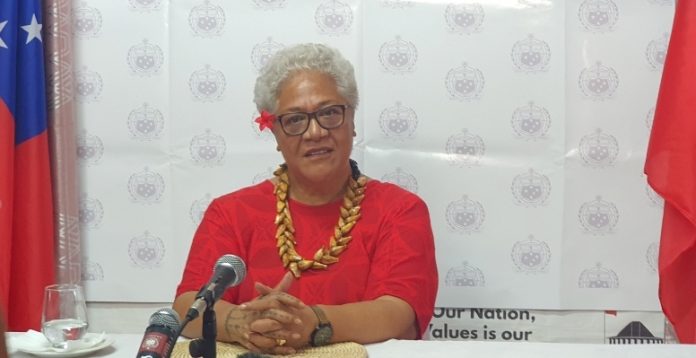 Saturday 24 July 2021, Apia Samoa.  Samoa’s political crisis has come to an end with a Court of Appeal judgment that declared lawful the swearing-in of FAST leader Fiame Naomi Mataafa as Prime Minister, in a ceremony under a tent outside Parliament House on Monday 24th May 2021.

On Saturday afternoon, the new Prime Minister of the Independent State of Samoa addressed the nation from the FAST Headquarters at Maota o Samoa in Vaitele.

Fiame thanked the people of Samoa for their patience as the nation endured the uncertainties of the past three and a half months since the April 9th general election.

Fiame confirmed that a meeting with top officials was held this morning to set out the process for a smooth transition, with plans for the  move into the Government Building at Eleele Fou on Tuesday next week, 27 July 2021.

The Prime Minister’s address, widely aired on social media live feeds, is published in verbatim below”

We thank the Lord for His love, His mercy and His grace which has brought us through hard and challenging times.

We thank the Lord for His faithfulness to His children and the gift of hope which lives in the heart of every true believer and which has offered comfort and calm.

Many of you will now be aware of decision of Samoa’s Court of Appeal presided over by the Honorable Chief Justice Satiu Simativa Perese and their Honours Justice Niava Mata Keli Tuatagaloa and Justice Tafaoimalo Leilani Tuala-Warren.

In that decision, the country’s highest and most esteemed Court has found that the swearing in which took place under a tent at Tiafau Malae on 24 May 2021, was lawful.

Can I offer my deepest gratitude to you, the people of Samoa, and in particular acknowledge the dignity with which you have waited with patience and forbearance, peacefully and respectfully, for the court process to be concluded.

You have been strong in claiming the peace which comes from faith, from the deep love for your country, and love for your families and villages and districts.

My administration is committed to returning this country to the special place dreamt of by our forefathers when they grabbed the mantle of independence almost 60 years ago.

Today, I and Cabinet met with key officials to begin transition of our new government into office.

At the earliest opportunity next week, Parliament will convene to carry out its first order of business to pass a budget to ensure the ongoing operations of Government.

WE have directed Treasury to prepare a budget premised on Article 95 of the Constitution which is 25 percent of the last budget – 2020/2021.

This will give effect of supply to continue the operations of Government and availing our new administration time to review the financial and economic situation of our country before presenting a full budget.

Cabinet will formally take office on Tuesday next week, on an expected smooth transition with the outgoing caretaker government.

Let us all now come together, each in our own way, to make Samoa, our beloved country, a place we can be proud of ad happy to live in.

It is my continuing prayer that God, upon which this country is founded, will continue to bless and guide Samoa.