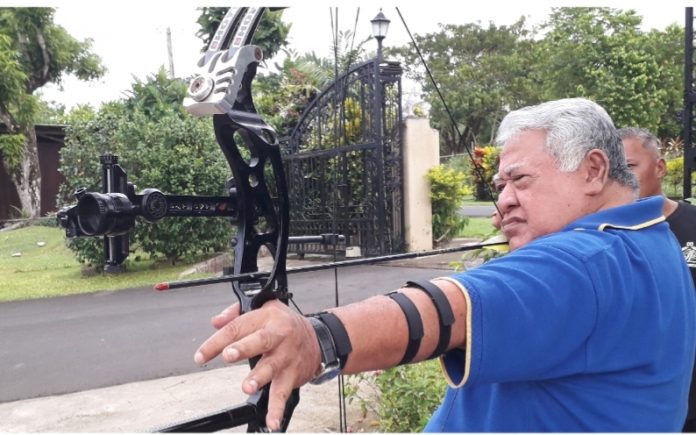 13 May 2019, Apia Samoa.  A government press release has confirmed that Prime Minister Tuilaepa Sailele Malielegaoi is competing for a spot in the national archery team to represent Samoa in the upcoming Pacific Games, with the aim of winning gold this time around for his country.

The Prime Minister represented Samoa in archery and won a silver medal in the Pacific Games of 2007. By doing so, he made history as the first Prime Minister to compete in an international sports competition, and the first Pacific government leader to win a medal while in office.

Speaking to Press Secretariat Nanai Lave Tuiletufuga during practice at his home on Saturday, the Prime Minister says that he knows he has to earn a spot in the Samoa archery team like everybody else.

“I have to make the cut  to compete in the Games through hard work and determination like any other athlete;

“There is no preferential treatment here and I am treated like any other competitor;

“Earning the right to represent your country at any international sporting event is the highest honour that any person can ask for and I will make the final cut to compete in the Pacific Games on my own steam power”, says the Prime Minister.

As a sportsman, Tuilaepa says that he has unfinished business with the Pacific Games and will be aiming for the gold medal he had missed out on in Apia in 2007.

This time around, Tuilaepa says that like any other athlete, the gold medal is the target.

“In my book, I have already won gold for Samoa as the oldest athlete to compete in the Games,” said the Prime Minister.

The Pacific Games, which attracts over 4,000 athletes from across the Pacific and held every four years, will take place in Samoa from 7 to 20th July.