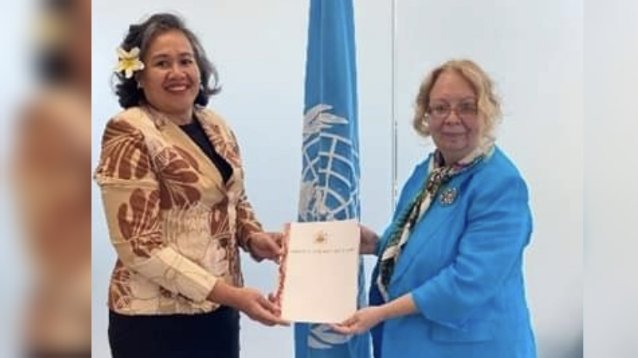 Gvt Press Release On 11 of May 2022, Samoa became the 182nd United Nations Member State to be accredited to the United Nations Office in Geneva (UNOG) following the presentation of credentials of the first Permanent Representative of Samoa in Geneva, Toleafoa Nella Pepe Tavita-Levy, to the Director General of UNOG, Tatiana Valovaya.

Toleafoa was appointed by the Government of Samoa earlier this year as Ambassador and Permanent Representative of Samoa in Geneva. She was the Assistant Chief Executive Officer of Trade at the Ministry of Foreign Affairs and Trade since April 2016. Prior to that, she served as Counsellor at the Embassy of Samoa in Brussels from 2012 to 2016.

This is a milestone achievement for the Government of Samoa, signifying the importance of strengthening relations with the United Nations and other international organisations in Geneva; and bilateral relations with the Swiss Government. Samoa’s presence in Geneva will provide the direct opportunity to contribute to the discussions shaping global responses to areas of importance to Samoa including sustainable development, Human Rights, health and the COVID-19 response, trade, connectivity and climate change.

The Permanent Mission of Samoa will strengthen Pacific and SIDS voices in Geneva; and joins Australia, Fiji, Marshall Islands, Nauru, New Zealand and Vanuatu of the Pacific Forum permanent missions in Geneva.