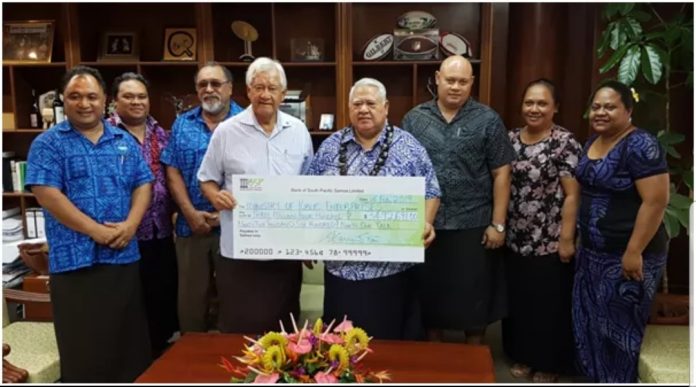 The dividend represents 50% of the Authority’s Net Profits for the Financial Year ended 30 June 2017 and sets the record as the highest return the Authority has paid to its shareholders since its establishment 19 years ago.

The cheque was presented by the Chairman of the SPA Board, Afioga Tuiloma Neroni Slade on behalf of the Minister Papaliitele Unasa Niko Lee Hang, Board of Directors, Management and staff.

During the presentation, the Authority’s Chief Executive Officer, So’oalo Kuresa So’oalo said, “We are very pleased with the Board’s decision to approve this cash dividend payment and proud to share the Authority’s financial success with SPA’s shareholders, the Government of Samoa.”

“SPA’s improved operating and financial performance and strong balance sheet have provided the opportunity to pay the highest dividend since its inception in 1999”, Sooalo added.

“This action demonstrates the Board and Management’s confidence in Samoa Ports Authority’s growth opportunities and reinforces SPA’s commitment to create value and maximize returns for the shareholders and strongly support its vision of being the Gateway for Prosperity.”

Sooalo also acknowledged the support of the Government of Samoa, Overseas Development Partners and Donors, Customers and Stakeholders who had contributed to the positive results.

In accepting the dividend, Prime Minister Tuilaepa congratulated and thanked the Chairman, Board members and the Authority.