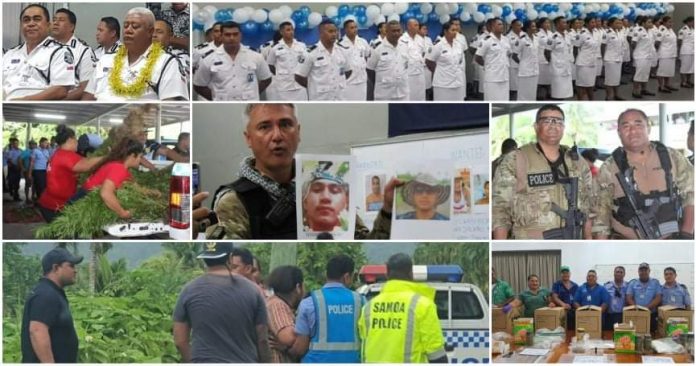 Samoa’s Police Commissioner confirms 6 deaths were recorded in that short period including the two murder cases widely reported; where a 67 year old man is in custody for a double murder in Afega and another for the death of a 24 year old in Lona, Fagaloa.

Also during the holiday period there were two inquests of alleged drowning; a 20-year-old boy from Malie who did not emerge from jumping off a waterfall at Togitogiga and a 1-year-old baby who drowned in Afega.

“There was also an inquest for the death of a male in his early 20s purportedly speared by a sword fish while out diving for fish in Asaga Savaii,” said the Police Commissioner.

Police road blocks came down hard on drink driving deterring many from attempting to get behind the wheel while under the influence of alcohol.

Despite warnings, however, a total of 31 DUI arrests were still made over the holiday period. Although there were a few horrific accidents causing deaths in the days leading up to Christmas, there were subsequently no road fatalities during the festive period.

In comparison to the 2019 festive season where Police responded to 823 calls, Su’a confirns there was a 6% increase in overall calls – or 50 more calls in 2020. That is 873 calls or close to 80 calls per day for our Police Service and first responders, while most of the nation was on holiday.

“There was only 1 murder case recorded for last year’s festive period compared to 3 this year”, said Su’a Fuiavailiili.

Top of the crime list was ‘assault’ with 593 charges, and second was for DUI with 523 charges throughout the year.

In addition to responding to  general calls, the Samoa Police Service were also responsible for enforcing Samoa’s SOE Orders. In 2020 they also managed to continue the war against drugs making several major drug busts throughout the year. A three month gun amnesty run from October to December also brought in many illegal weapons kept in homes across Samoa.

With the return of motor vehicle registrations and licensing to the Police Ministry, traffic tickets skyrocketed in 2020 compared to 2019.

“A total of 9,983 traffic tickets were issued to motorists for the year 2020, with 1,347 of those being citations for unlicensed drivers,” said Su’a.