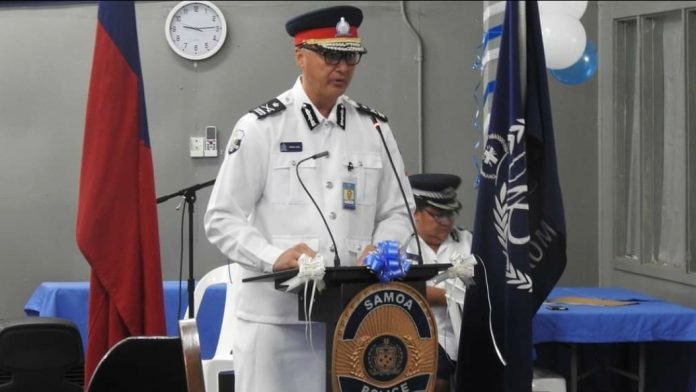 A vigorous screening process and higher recruitment standards imposed by the Samoa Police Service saw 49 graduate from the police academy, out of 599 interested applicants.

“They have pulled through the toughest, most comprehensive and demanding recruit selection and recruit course programs ever offered by the Samoa Police Service,” said Police Commissioner Su’a Fuiavailiili Egon Keil at the 2021 graduation ceremony earlier this week.

“We received 505 for police and 94 for prison however, after a strict screening process 317 made the short listing and were permitted to go through the four phased recruitment selection program,” said Su’a.

The 4-phased process would be even more gruesome; with only 53 applicants admitted into the Police Academy – 49 Police and 4 for Prisons.

A further 4 could not complete the course for various reasons, leaving 25 women and 24 men still standing after the 17 week Basic Recruit Course Program.

Su’a Fuiavailiili said some of the areas examined during the screening process included background, personal and work history, and whether or not they had a criminal record using an updated National Criminal History database.

Medical History and Character References and Communication Skills were taken into account, and a higher level of Education in English Reading, Writing and Comprehension, as well as Computer Skills.

A complex, critical thinking panel interview was also part of the “gruelling vetting process”, as detailed by the Police Commissioner.

An analysis of the new recruits reveals 8 applied from Savaii, while the eldest is a 35 year old female and the youngest, a 21 year old male.

Applicants with a higher level of education were sought by the Samoa Police Service with 30 new recruits being graduates of the National University of Samoa (NUS).

One has a Bachelor of Arts degree, one has a Diploma of Education and a further 28 hold certificates from NUS, while the rest are high school graduates.

“As you can see, in an effort to increase professionalism, accountability, and esprit de corps within the Samoa Police, we have advocated for higher standards by focusing our recruitment efforts on candidates with higher educational qualifications and those with high ethical standards,” said Samoa’s Police Commissioner.

Commissioner Keil called on the 49 new recruits to uphold integrity, strive for excellence and not misuse police powers entrusted to them by the people of Samoa.

“Remember our 3 Ds— Do your job; Document; Discipline…

“Do not play favorites; do not look for personal gain.
But be brave, be honest, be gracious, and most of all be a great public servant..

“And finally, always watch over one another in the frontline and remember to strive for excellence by polishing our gold— our image. And you all know what I mean by that,” said Su’a.

All 49 were sworn in by a Court judge last Friday and have been assigned to various divisions of Police and Prisons.