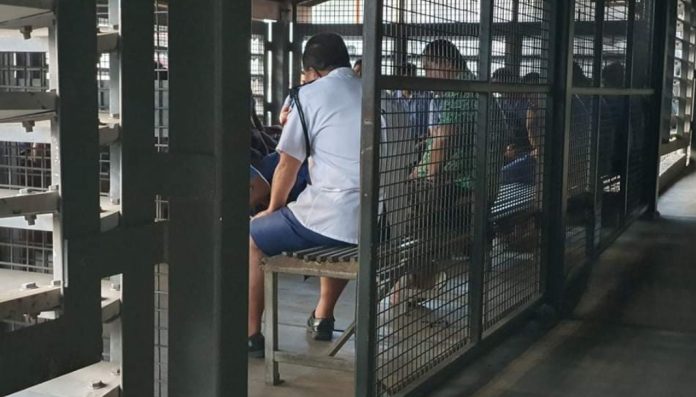 The Samoa Police Service responded to yet another school fight that broke into a riot at the Savalalo fish market area between students of St Joseph’s College and Leifiifi College yesterday afternoon.

More than 50 students from the two schools, all still in uniform, were loaded onto police vans after SPS disbursed the fight just after 4pm.

In response to questions, Police Commissioner Su’a Fuiavailiili Egon Keil said students from both schools were taken to police headquarters and questioned for fighting and assault after a response by police at the fish market.

Su’a said school princpals were called in to headquarters yesterday afternoon to help address the problem, and police would be visiting both schools this morning.

“We will up our patrols in the involved area and our representatives will go to schools tomorrow to address the teachers and students”, said the Police Commissioner.

At the police station, close to 30 young men from St Joseph’s College were inside the holding cell of the Samoa Police Headquarters, being mentored and spoken to by a senior police officer.

“Those of you in Year 13 must focus on finishing school…you only have a few more months left of school and this behaviour can affect you and change your future forever…fighting in town will not get you anywhere”.

“Please remember the time and effort your parents go through to put you through school.. look at how young some of you are, in Year 9 and 10..”

“How will your parents feel when they come down here and we have charged you under the law? That criminal record will follow you wherever you go…”

Inter-School fighting amongst young men is an ongoing generational problem in Samoa and Pastor Eric Poe says he believes school pride instilled by certain high schools into students is at the core of the issue.

The Government had banned all inter-school sports one year, believing that competition between schools was at the root cause of the problem.

Since schools have re-opened with the easing of COVID-19 State of Emergency Orders, SPS have had to respond to at least two incidents of inter-school fighting at Savalalo, despite there being no interaction through any form of school competition.

Pastor Eric Poe who is a former Program Manager of the Samoa National Youth Coucil and former Director of Teen Challenge Samoa, says he believes it is over-rated school pride being instilled into students by administrators and even former students that is at the core of the problem.

A former Avele College student himself, Pastor Eric is currently working as an alumni of his school on an intervention program to try and address the issue.

“We had a program at Avele College today.. and I just found out about that riot this evening.. really very sad;

“But I always believe that culture or sipili in the schools is what we need to go in and stop –  it has to be broken.. because that is what creates a strong identity or sense of belonging for those students…to fight for the name of the school;

“That’s why private schools are not involved, there is bullying in all schools, but the sipili brings a stronger drive and pride to the students”, says Pastor Eric Poe.

Head of State of Samoa Becomes 29th Chancellor of USP