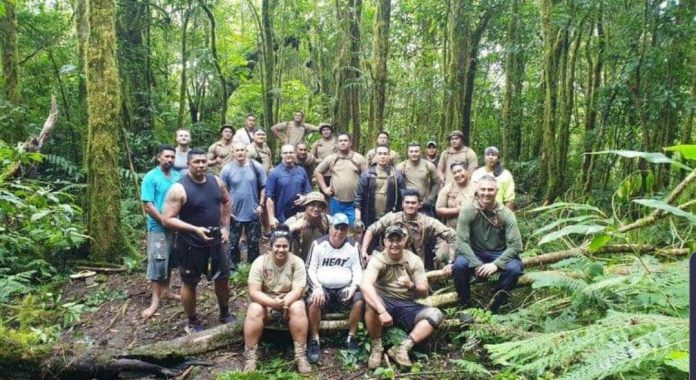 The Ministry of Police and Prisons (MoPP) continue to ensure they are prepared for the worst case scenarios of emergency situations that may arise in Samoa; and last week included two simulations in Savaii.

“We also had a Royal Australian Navy advisor and an Australian Federal Police advisor, along with Aopo Village representatives, who participated in Savaii simulations”, said Su’a.

The Police Commissioner confirmed that Hon. Minister of Police and Prisons, Tialavea Tionisio Hunt had also taken the trip to Savaii and joined them for the first day of the exercise.

The simulations are said to have also tested the capacity and speed of the Australian Government donated police patrol boat, the Nafanua II, to test for emergencies that would involve urgent evac and movements of persons between the two islands.

“We have to ascertain how quickly she can transport members from Upolu to Savaii in case of an emergency”, said Su’a.

“We can’t  give out too much detail.., but the first scenario involved Vaia’ata Prison and the second involved an attempt to hike to the top of Mt. Silisili which is about 1858 metres above sea level,” explained the Commissioner.

For those who frequent the Robert Louis Stevenson trail hike on Upolu Island, Mount Vaea is a mere 472 metres above sea level – making the Mt Silisili climb 4 times that elevation.

“The two day exercise, in our view, was a success… coordination, communication, planning, execution of duties, team work, and capacity of our current equipment and human resource capabilities were tested”.

“We learned from our training experiences where improvements are needed, and also where our strengths lie. The exercises were a success and noone sustained any injuries”.

“Adding to our training, the Nafanua II was dispatched to a live event in Neiafu where unfortunately, lives were lost from drowning;

“The other event was the incident of two people falling off the cliffs of Tiaapapata;

“We managed to remain in contact with our staff at the two incident scenes while we were in the middle of an exercise that day; ensuring appropriate resources were dispatched to both locations, including coordination with FESA”.

The Police Commissioner said the overall purpose of preparedness is, “to provide the best response service possible for Samoa for all situations, if and as the need arises”.