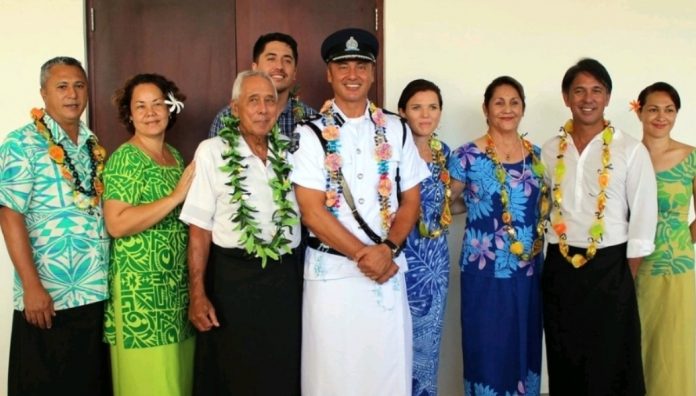 Samoa’s Police Commissioner has led transformational changes within the Ministry of Police and made marked contributions towards keeping Samoa safe in the past 12 months.

The war against drugs culminated in a raid of 6 different plantations deep into the notorious Faleatiu hill area and led to the arrest of 11 people this year.

Marijuana plants worth over ST$10 million tala were brought into the Samoa Police headquarters in an operation that utilised over 100 officers.

“Meth is a highly addictive drug that destroys not only the person consuming it but also corrodes the very fabric of communities, including our vulnerable youth;

“It has no place in Samoa, or anywhere else. We will not slow our pursuit of arresting and prosecuting those who are involved”, said Su’a Fuiavailiili.

There has been a notable increase in opportunities for women within the Samoa Police Service since Su’a has taken over as Commissioner.

Today, all Units of the Samoa Police consists of women staff in male dominated areas such as the Nafanua Patrol Boat where three women are posted as sailors. There is a female officer training as a dog handler with the K9 Unit, and two female police officers work in the Tactical Operation Section which requires carrying of arms.

Su’a himself is flanked by women in the highest leadership positions. The Deputy Commissioner and the Director of Corporate and Strategic Services are both women.

The Samoa Police Commissioner has continued to establish and maintain relationships with development partners such as Australia, New Zealand, USA, China and France to grow opportunities for training and resources needed to improve police services.

Samoa’s Police Service has undergone organisational changes and one of the key reforms led by the Police Commissioner was to improve morale and build team spirit.

“Something that has never been done before are those trainings in the United States;

“And I do think we are more unified now than ever before. In the past we’ve been fractured and even divided as an oganisation;

“But now we have come together as a unified organisation.”

Su’a says the reforms would not have been possible without the support of the Prime Minister who this year, brought the Ministry of Police back under his wing.

The traffic division within the police service was re-established this year with the return of this important law enforcement service from the Lands and Transport Authority.

“All of that was actually done by police before it was taken away. I am very honored and proud that our Government has the trust to give it back to the Police;

“It is a function that is crucial to keeping Samoa safe and it will be a huge challenge, but I know we can do it well,” says Su’a.

Another marked achievement through 2019 is the replacement police patrol boat Nafanua II and an airplane surveillance service for Samoa through the assistance of the Government of Australia. Commissioner Keil was at the forefront of those developments this year.

“It is an honor to have a Samoan Representative in this regional initiative, looking into every aspect of what transnational crime is and what is occuring in the Pacific;

“That information is fed back to us on how to keep Samoa, as well as other Pacific Island nations safe.”

Su’a said he had never imagined he would be Samoa’s Police Commissioner but when the opportunity came up four years ago, he thought he would definitely regret it if he didn’t apply.

“I feel it was something that I was drawn into when I returned to Samoa;

“It’s not easy, it’s a lot of work being the Police Commissioner,” says Su’a with a smile.

“A lot of sleepless nights, a lot of tossing and turning, there is a lot of worrying,” he adds.

Plans and works for a Police Academy are underway and Keil said it won’t be just the police using those facilities.

“Our Police Academy is planned for continuous educational programs for all police not only new recruits; its designed also for police from other Pacific Island countries to come and share their knowledge and also train at our Police Academy”. 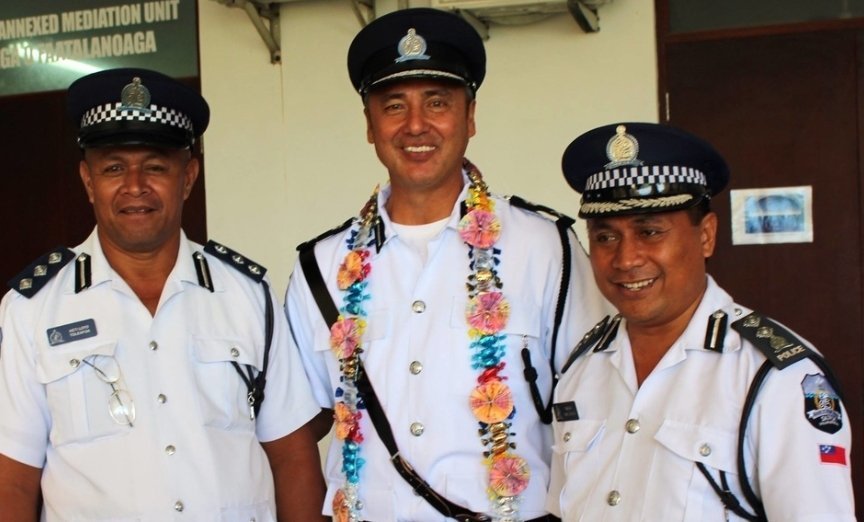 “I always tell my staff the three ‘Ds’, the first one is ‘Do Your Job’ – that means you have to know the policies, know the law, know what is expected of you, then just go DO IT;

“The 2nd ‘D’ is Documentation – You have to document a lot of what you do because later on you have to answer for it, and answering verbally is one thing but you might not recall what happened. But if you document everything, it will prove what you’re trying to say;

“And the 3rd ‘D’ is Discipline – everything is out the window if you lose your discipline. If you don’t show up on time, if you don’t listen to your supervisor, if you don’t do the right thing and if you don’t follow the policies and the law.”

“I’ve got to make every cop proud of what they stand for and what they do, and encourage them to push themselves”.

According to the Commissioner, Samoa will soon see police officers with badges and next year they hope to ensure that badges are issued for officers to carry around.

The clean up within the Samoa Police Service has not been easy as Su’a has had to make difficult decisions to fire and demote police officers who have not conformed to acceptable standards.

“It’s the behaviour I dislike.”

In an effort to clean up corruption within the SPS, Su’a fought for increased salaries but says that there is still work to do in this area.

“It’s still not enough, because it can encourage corruption when we are not paying enough.”

At the entry level of the Service, Su’a is changing the mindset that if you can’t get a job or advance your education, then you sign up for the Samoa Police Service.

“That has to change, that should never have been the case, because the work of police officers should be held at a very high standard. We take an oath to do this job, and we have to stress the importance of keeping those oaths to the new recruits, and also to the entire police force.”

Su’a has had to fight the highly sensitive area of family violence which has become prevalent in Samoa. SPS have been at the forefront of horrific cases of domestic violence affecting women and young girls in Samoa this year.

The Police Commissioner says the murder of the UTOS CEO was an important case for them this year and was glad they were able to secure a conviction with the assistance of the Attorney General’s Office.

“It sends a message out to husbands, boyfriends or whoever is out there doing this, thinking they can kill their partner and then try to pretend it was a suicide;

“You can’t get away with behaviour like that, we will find out what you did, and you will be prosecuted.”

The role comes with its sacrifices and Commissioner Keil says he is thankful to the support he has around him.

“I’m giving my soul into this role, and it does take a toll on other things, and you have a lot less time for other areas of your life; and so I thank my family for their support, and also to all our overseas partners.”

“I’m also very thankful to my staff and the Samoa Police Service. They’re really trying and they do get it from me everyday, but they all know it’s just my way of pushing them to do better.”

“Samoa let’s be thankful of the blessings that we have. I think it’s important that we recognise the areas that we need improvement on as a nation, and be thankful for what we have because there are a lot of countries and a lot of people all over the world who don’t have what we have here;

“I think we just need to be a little bit more forgiving, and our people need to be more respectful and just show more kindness to each other, because we are seeing too much crime in Samoa, and lot of what we see are preventable crimes.”