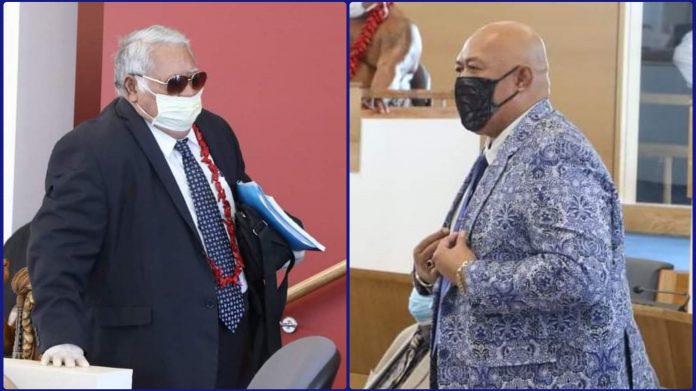 6 June 2022, Apia Samoa. Samoa’s former Prime Minister and leader of the Human Rights Protection Party, Hon Tuilaepa Dr Sailele Malielegaoi and party secretary Lealailepule Rimoni Aiafi have filed a joint petition before the Supreme Court of Samoa against a decision of Parliament to suspend them indefinitely.

The findings of the Privileges and Ethics Committee were tabled in Parliament by Committee Chairman Hon Valasi Luapitofanua To’ogamaga Tafito. He told Parliament that all members of their committee had signed off on a report which found the opposition MPs in contempt of Parliament, and in  breach of parliamentary privileges.

The Privileges and Ethics Committee of Parliament was convened by the Speaker of the House, Papalii Lio Taeu Masepau to consider a complaint against Tuilaepa and Laleailepule which had been filed by Deputy Prime Minister Tuala Tevaga Ponifasio.

In the original complaint, Tuala alleged that by being found guilty of Contempt of Court by the Supreme Court, Tuilaepa and Laleailepule had brought shame and embarrassment upon Parliament.

The Court decision referred to by Tuala was handed down by overseas-based Justices, Robert Fisher and Raynor Archer. They found the HRPP leader and secretary guilty of contempt of court, however, the Court had also ruled that they would  “impose no penalty”.

The Court relied heavily on what the Justices referred to as, the Harmony Agreement, signed by Prime Minister Hon Fiame Naomi Mataafa and Tuilaepa. In Parliament, Fiame took the strong position that the integrity of Parliament must be upheld by all members. Fiame also said that they had not signed a harmony agreement, but rather, it was a deed of settlement in relation to Court matters.

Under Parliamentary Standing Orders, a complaint filed by one MP against another must be referred to the Select Committee if the Speaker finds there are grounds to do so.  Consequently and in response to the Deputy Prime Minister’s complaint, Lealailepule had also filed a counter-complaint against Tuala Ponifasio. That complaint was subsequently thrown out by the Speaker of the House, who just last week declared that Lealailepule’s complaint did not have adequate grounds to be referred to the Privileges and Ethics Committee.

A source from the Ministry of Justice this morning confirmed that the Court has received an application from Tuilaepa and Lealailepule, asking the Supreme Court to consider and reverse Parliament’s decision, that they be suspended indefinitely.

Speaking to Samoa Global News, Lealailepule Rimoni Aiafi said they are of the strong view that they have not breached any standing orders and are in fact, not in Contempt of Parliament.

Lealailepule said there is no basis for their indefinite suspension and they are of the view that Parliament’s decision is both ilegal and unconstitutional.

Lealailepule added that they have to seek remedy from the Court because their respective constituencies will be without a voice for this indefinite period.

He said the decision is against their rights to pursue their roles as elected Members of Parliament.

Tuilaepa and Lealailepule were both uncontested at the 2021 General Election.