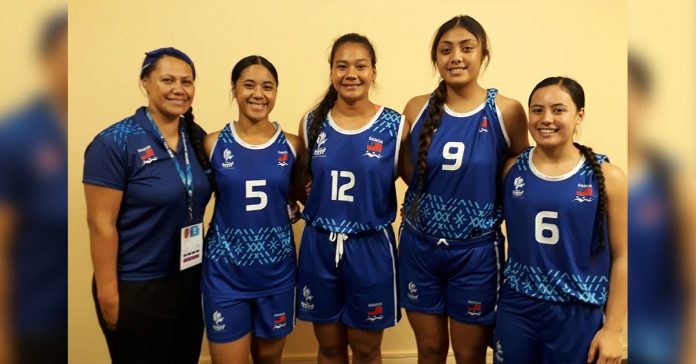 This is the first time that the faster version of the game has been fielded for the Pacific Games and most other countries brought two separate teams.

Speaking to Samoa Global News Samoa’s Head Coach June Tahata said the most challenging part for the girls was to try and adjust to the rules as well as the pace of the game.

Samoa’s 3×3 team is made up of the same girls who played in the 5×5 basketball team and won a bronze medal.

“We have come through the 5×5 but the major challenge is the 3×3 because the girls have never played 3×3 before,” she said.

“The girls were unable to have any trainings because we were in the bronze medal game so the focus was securing that medal,” said the coach.

“We made adjustments game by game; the tempo is faster and they’re even still learning the rules.”

Ms. Tahata explained that the 3×3 is a completely different game from the 5×5 requiring a different set of skills.

“The difference between the 3×3 and the 5×5 is that in the 3×3 the players have a 12 second shot clock and it’s very fast paced and very up-tempo;

“The 5×5 is more shot clock on offense and defense;

“So it really all comes down to the player’s skills, so they have to be 3×3 specialists,” she said.

“They are still finding chemistry and what works for them as a group and they are adjusting to the content which is something they have to get familiar with, but they have stepped up to the challenge and they really played it tough.”

The head coach went on to say that for future games, it is very important to have two separate teams for the sport.

“It’s important that we have two separate teams so we can actually focus on developing our athletes and just being able to build that chemistry to pre-tournament,” she said.

“The 5×5 team were very lucky because we did get to spend quite a bit of time with them which resulted in them receiving bronze medal.

“So I believe that if we had a week to prepare the girls it would be a totally different story.

“They had no rest, they jumped from the 5×5 to the 3×3 and we’ve had some injuries but they’re still going and its all because they are representing Samoa with so much love and want to put our country to the top.

“They decided to play hard for Samoa and give it their best.”