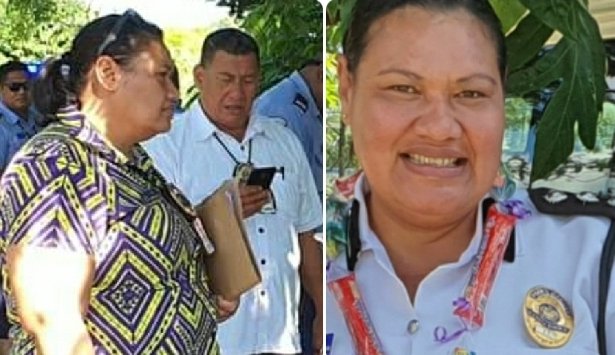 After 20 years of service to Samoa’s police force Papalii Efo Moalele has been promoted to Assistant Commissioner of Police and her goal is to empower women in policing.

“My vision is to ensure that women in policing are valued, and it is recognised that their participation is essential for the safety and security of our country,” said Papalii in an interview with Samoa Global News.

Papalii says there used to be many inherent risks of policing as an area dominated by men, but she encourages women to step forward and break down those barriers by becoming more involved.

“As women, we need to work together in the spirit of resilience and commitment, always advocate for upholding the integrity of our women,” shares Papalii.

Described by the Police Commissioner as an excellent choice for the position, with tenacity for the job, proven professional experience and an exemplary work ethic, Papalii Efo is well respected within the Samoa Police Service and across the Pacific region.

A strong advocate for the advancement of women, Papalii Efo acknowledged the leadership of Police Commissioner Su’a Fuiavailiili Egon Keil and attributes his support for women in leadership positions, as a catalyst to her promotion.

Papalii says the Samoa Police Commssioner has never distinguished her or any other female officer, by gender.

“Fuiavaili’ili just sees us as Police Officers enforcing the law,” she says. “He awards us based on merit and what we achieve we must work and he creates a level playing field for us”.

Papalii Efo observes that since Su’a took up the role of Police Commissioner in 2015 the Service has seen a huge shift in the number of women taking up key positions. His first Deputy after an overhaul and restructure of the Ministry saw DC Papalii Monalisa Tiai-Keti selected in 2018.

Today over 25% of the Samoa Police Service are women equating to close to 200 women out 700 .  In a predominantly male sector, women have broken barriers within the Service with several now serving on the Nafanua Patrol Boat, the K9 unit and the Tactical Operations Squad.

Samoa’s newest Assistant Commissioner of Police encourages women in the police service to work hard with integrity and in the spirit of love for the people.

“You must prove to yourself that you can do it”, says Papalii.

Responding to questions Police Commissioner Su’a Fuiavailiili Egon Keil said women have never held so many powerful and critical positions in the history of the agency, and says it has been a long time coming.

“I have never been so proud of their work and contribution to enhancing and development of our country’s police force”, said Su’a.

“Papalii Efo was confirmed by Cabinet on the 16th of June 2021 by FK(21)24 to fill the position of Assistant Commissioner of Police..

“We are all very proud of her and we wholeheartedly welcome her into her new critical role,” said the Police Commissioner.

“She is highly regarded in the Pacific region’s police community for her contributions in the advancement of gender equality in law enforcement,’ said Su’a.

“Papalii Efo’s promotion is well deserved. They earn it through merit…not because they’re of a particular gender. Their work and credentials speak for themselves”.

Papali Efo Moalele acknowledges the support of her husband and children, her parents, and her extended family as well her church family – EFKS Alamagoto.

“I thank the Commissioner of Police for his guidance and support. He has been instrumental in helping myself to achieve this goal and I thank him for his trust and confidence in me, to carry out this important role.. I am forever grateful..GLORY BE TO GOD”.