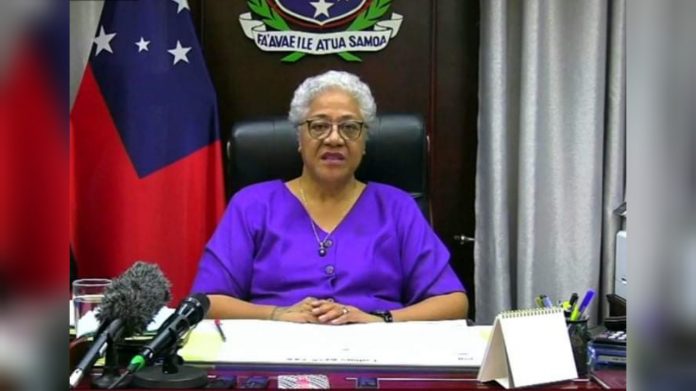 10am Friday 28 January 2022, Apia Samoa. After six days of a nation-wide lockdown at Alert Level 3, Prime Minister Hon Fiame Noami Mataafa has announced that Samoa would move to Alert Level 2 as of 6pm this evening, Friday 28th January 2022.

In a press conference with local media on Friday morning, the Prime Minister said Cabinet has made the decision to end the nation-wide Level 3 lockdown after the regular testing schedule has confirmed that there is no community transmission, and all affected persons are in managed isolation.

There have been at least three rounds of testing since the flight arrived into Samoa last Wednesday 19th January 2022 from Brisbane. All 73 passengers were taken into quarantine as per Samoa’s border control protocols, and around 260 frontliners involved in serving the flight all returned negative first tests when they were taken back into quarantine on Friday 21st January according to Health Director Leausa Dr Take Naseri.

Prime Minister Fiame Naomi Mata’afa says Cabinet has also considered that other than five nurses who have been in isolation with the infected positive cases since the flight arrived last Wednesday, no other frontline staff are affected.

The Prime Minister confirms Samoa remains at 27 positive cases – 22 passengers from the repatriation flight, and 5 nurses assigned to the special isolation ward at Motootua National Hospital. “All are well and remain asymptomatic,” confirms Fiame.

The Prime Minister further confirmed that results of seven specimens sent to New Zealand for variant determination tests have returned with 6 positive for omicron variant and one positive for delta.

The Prime Minister gave an overview of Level 2 as being the re-opening of all businesses and government services, while public gatherings are capped to 30 people.

There will be mandatory social distancing, wearing of facial masks and showing of vaccination cards.

All inbound and outbound flights are suspended until further notice. Weekly cargo flights in and out of Samoa remain.

The inter-island service between Upolu and Savaii will resume as usual, however, social distancing is to be enforced.

To ensure adequate supplies into the country, all container ships and oil tankers will be allowed to berth at Matautu wharf during Level 2.

The opening of schools for 2022 is suspended under Level 2, and the use of virtual classrooms and e-learning are encouraged.  Children in the age group of 12 and under are prohibited from public places.

The Prime Minister said all other  requirements and restrictions under Samoa’s State of Emergency Order No 63 are to be observed under Level 2.

“The changes are necessary to ensure the country is protected and the safety and security of the people maintained,” said the Samoa Prime Minister.

Samoa will also move forward with its vaccination programme for children 5 to 11 years old, and booster shots for those fully vaccinated.

All in quarantine continue to be tested and monitored, and the Government will issue an update should the alert levels need to be revisited.