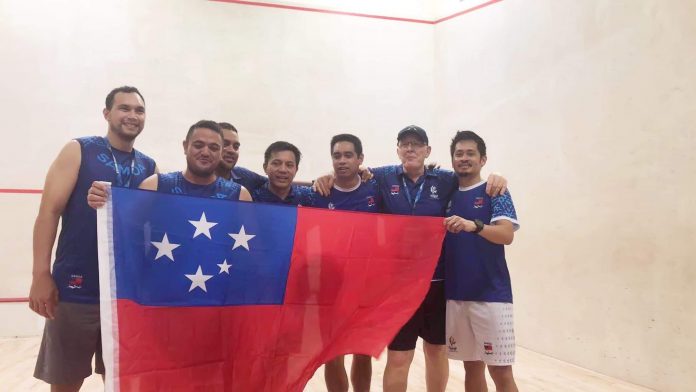 The team is made up of Chad Rankin, Onesemo Old, Ivan Ah Liki, Jordan Ah Liki and Maverick Wetzell.

Samoa lost to Papua New Guinea, Fiji and New Caledonia in the preliminary rounds but edged Fiji out of medal contention with a win over Norfolk Island and a draw to Tahiti.

Samoa didn’t give Tahiti another chance with a medal at stake, Chad Rankin conceding the only loss for Samoa during the bronze match.

Onesemo Old fought off his opponent in a match that kept the Samoan supporters at the edge of their seats. Semo never lost composure to come from behind in two games which both went to tie breakers.

With Semos equalizer, the Ah Liki brothers Ivan and Jordan both thrashed their Tahitian opponents 3-0.

The medal ceremony will be held later this evening after the Men’s finals.

Samoa could secure more medals in Squash with the Individuals event starting tomorrow and the doubles event next week.