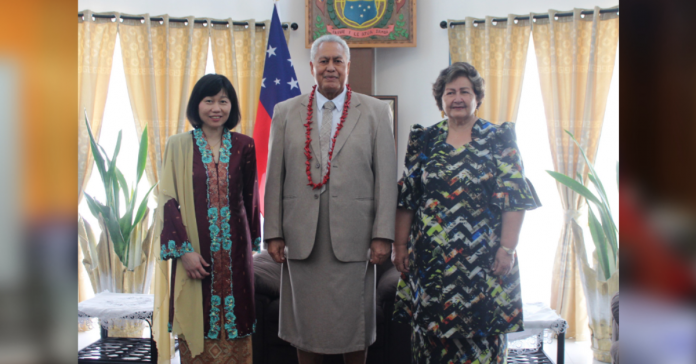 29 August 2019, Apia Samoa. H.E. Ms. Nur Izzah Wong Mee Choo is in Samoa to present her Letters of Credence to the Head of State, His Highness, Tuimalealiifano Vaaletoa Sualauvi II.

Ms Wong Mee Choo who has been the High Commissioner for New Zealand and several Pacific Islands since February 2018 highlighted Malaysia’s efforts in promoting bilateral relations with Samoa through trade and capacity building programmes.

The High Commissioner also reflected on the Malaysian Technical Cooperation Programme which has benefited over 100 Samoan officials in building capacity on areas such as diplomacy, entrepreneurship, taxation, health, energy and technology development.

Samoa’s Head of State in response accepted the Malaysia High Commissioner’s Letters of Credence and encouraged continued cooperation between the two countries, thanking the Malaysian government for capacity building programmes delivered for Samoa over the past decades.

“Both countries have maintained friendly relations through close collaboration on issues of mutual interest and concern at the United Nations and other multilateral fora,” reads a press statement.

From 2014 to 2018, HE Wong Mee Choo was the Undersecretary of the Inspectorate Division at the Ministry of Foreign Affairs of Malaysia. She held the positions of Principal Assistant Secretary and Assistant Secretary over the ten years from 2004 – 2014.  Prior to those posts, she served her diplomatic posting at the Embassy of Malaysia in Beijing, China as Second Secretary from 2000 – 2004.

Before her diplomatic career, she worked at the Ministry of Tourism, Arts and Culture of Malaysia as an Assistant Secretary.

The High Commissioner has a Post Graduate degree in International Relations Studies from Tsinghua University, Beijing, People’s Republic of China.

The High Commissioner resides in Wellington and was accompanied by her spouse and Second Secretary to the Credentials Ceremony.