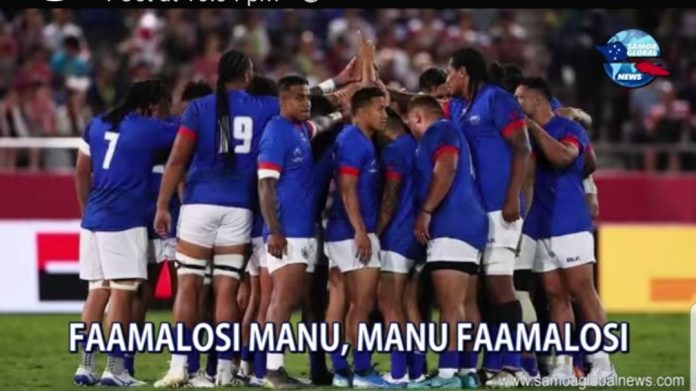 Logovi’i Mulipola starts at loose-heap prop bumping Jordan Lay to the bench. This pushes James Lay out of the 23.

The team is otherwise the same squad from the loss against Japan which essentially pished the Manu Samoa out of quarter final contention.

In a press release, Jackson says, “We thought Jordan Lay played extremely well against Japan. But we’ve gone for Logovi’i Mulipola this week to just give that little bit of certainty at scrum time. Jordan is fantastic around the field and we’ll probably give away a little in that area. But we just want to make sure our set piece is strong and solid;

“As we know, the Irish are going to be tough in that area, so Teofilo Paulo has come in for Pilula Fa’asalele – who will drop to the bench. But that’s just about the need to have some height through our line-out to be able to compete with Ireland’s height. And to have an out and out lock partnering Kane Le’aupepe just gives us that good balance in our set piece – especially at scrum time.”

The Manu Samoa backline is unchanged from that which started against Japan.

“I think UJ Seuteni is starting to prove that he’s an international first five and I think he showed that against Japan and then he transitioned to fullback. Henry Taefu took over the kicking duties last week and the performance that he put in was massive – so it’s good to have that consistency in the back line.”

Ireland is chasing a bonus point win and Manu Samoa would be determined to complete their Rugby World Cup journey on a high.