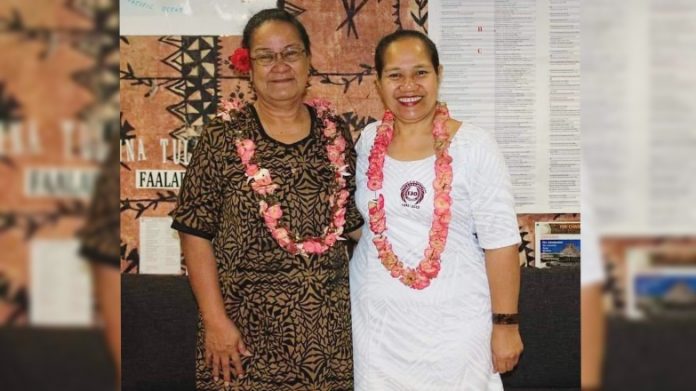 By: Marc Membrere, Government Press. The outgoing Executive Director of the Samoa Law Reform Commission, Teleiai Dr. Lalotoa Mulitalo has given her thanks to the Government for an opportunity to serve Samoa, and says the Lord will handpick the next person to take over her role.

Known not only in Samoa, but also the region for her work in law, Teleiai farewelled her colleagues in the Commission and the Minister of Justice and Courts Administration Matamua Vasati Pulufana in a ceremony on Tuesday.Teleiai is the third Executive Director of the Commission founded in 2008, following Tafaoimalo Leilani Tuala – Warren and Leota Theresa Potoi when she took leadership in 2016.

Throughout her six years in the Samoa Law Reform Commission, she oversaw 15 projects and more than 40 ad hoc projects.”I would like to thank the Government for giving me the opportunity to serve Samoa, and the people,” Teleiai said on Tuesday.

Throughout the challenges she faced, Teleiai called her journey a golden opportunity to serve under and beside influential leaders of Samoa.

“I am greatly indebted to our Divine Lord, our great judge to whom we pay allegiance to. Truly it was from His wisdom my competent and hardworking staff and I completed and achieved goals reaching our people for their heartfelt input, it is on that note, that I am confident He will handpick the next leader to take over,” she said.

Addressing her staff, Teleiai acknowledged their teamwork saying she has witnessed the development of lawyers that have come through the Commission.

“I have been a proud Executive Director of this small office that has done wonders in achieving what many many I know for a fact many post-colonial countries wish they could do, achieving, developing, and advising on a solid recognition of their culture and traditions in their formal parliamentary laws, in particular the supreme law, the constitution of Samoa,” she said.

“I look forward to bigger and greater law reform projects that the Samoa Law Reform Commission is most capable of,” she said. I pray to the Lord that you gain strength and happiness in serving our country.”

Matamua, who spoke on behalf of the Government, gave her thanks to Teleiai for her service and dedication to Samoa since she had become the Executive Director of the Commission, a role which only women have taken since it was founded.

By 2005, Teleiai had attained a Master of Law from the Australian National University, and in the following year she gained a Certificate in Legislative Drafting from the Institute of Advanced Legal Studies in the University of London.

In 2013, she earned her doctorate (Doctor of Philosophy (Law)) after graduating from the University of Queensland TC Beirne School of Law, where she was also the recipient of the Dean’s award for Higher Degree Research Excellence.

Teleiai was also the winner of the Greg Urwin Award in 2017, an award established in memory of the late Secretary General of the Pacific Islands Forum Secretariat, with the support of the Australian Government.

They are made available to Pacific students who show potential to become prominent leaders in their chosen field.