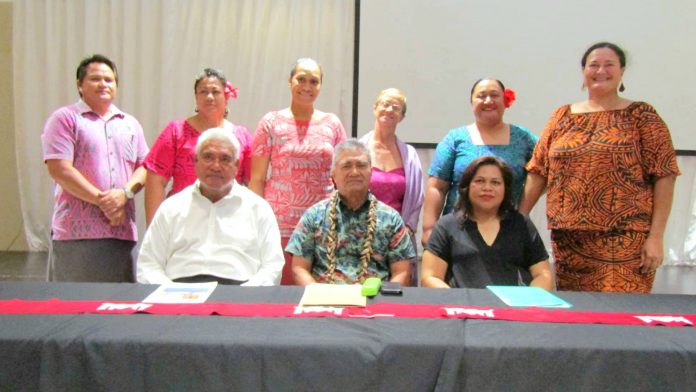 Sat 9 Oct 2021 Apia Samoa. The Ministry of Women Community and Social Development (MWCSD) is leading the development of, “The Samoa National Prevention Framework for Ending Violence Against Women and Girls”.

Minister of MWCD Hon Leota Laki Lamositele, also Associate Minister of Finance was joined by Police Minister Hon Faualo Lefau Harry Schuster and other partners at the launch held at Tanoa Tusitala on Friday morning. The Samoa Police Domestic Violence (DV) Unit  together with Non Government Organisations (NGOs) such as the Samoa Victim Support Group (SVSG) are in the frontline of the prevailing national issue that sees 2/3 women reported to be regularly kicked, punched, slapped and choked by their intimate partners; 1 in 10 girls reporting to have been raped by someone known to them in their lifetime, and 8/10 children reporting to have been subjected to kicking, punching or other assaults. (National Public Inquiry into Family Violence Report 2018).

In his keynote address the MWCSD Minister said the launch of Samoa’s National Framework was the beginning of a very important undertaking, “one that is fundamental to the protection of all women and girls of Samoa from all forms of violence”.

“I am pleased to deliver this statement to mark the beginning of a very important undertaking, one that is fundamental to the protection of all women and girls of Samoa from all forms of violence”.

He said the initiative aims to document long term aspirations and goals for ending gender based violence (GBV) over a ten year period.

The Minister confirmed the framework would also be ‘guiding the conduct’ of the $1 million tala included in the national budget for GBV under MWCSD.

Hon Leota Laki said the work is led and coordinated by MWCSD in partnership with the UN Spotlight Initiative program with funding and technical Support by UNWomen.

He called for the community and all of Samoa to stand together in the development of the framework as a map for programmes to be implemented.

“A diverse technical working group of national experts has been formulated to provide key support in the development of the framework, and to promote national ownership of an instrument informed by our context and promoted by political leadership and commitment”, assures the Minister.
“The work intends to build on the existing ending violence programs to further advocate for the mainstreaming of Violence against Women and Girls work in alignment to the national policies and planning frameworks already in place,” says Leota.
An informed, participatory, and inclusive consultation processes was promised; “and will be conducted from the highest government officials to local village representatives and groups, to ensure that the development of the framework is informed by a holistic view”.
There were four key features of the framework will focus on, which according to the Minister will be: prevention, survivor center response services, holding of perpetrators accountable, and strengthening existing prevention infrastructure.
“This is also a contributing mechanism to the Government’s development efforts at district level for the next 5 years in addressing Gender Based Violence and Violence Against Women and Girls with key primary prevention principles, practices and approaches to advocate and promote the agenda for transforming gender norms, structures and practices”.
“The Samoa National framework needs the working together of all including the Domestic Violence Unit of the Ministry of Police, Prisons and Corrections, the Samoa Victim Support group SVSG, Spotlight program, the Pacific Partnership to End Violence Against Women and Girls and the Prevention Framework,” added the Minister.
“O lenei galuega ua fuafuaina o se vaega taua foi o galuega ma fuafuaga a le tatou malo e faatauaina ai le atinaega o tagata aemaise le puipuiga o saogalemu o aiga ina ia faamautu ai le nonofo filemu ma le nonofo fealofani i vaeg uma o le atunuu.” 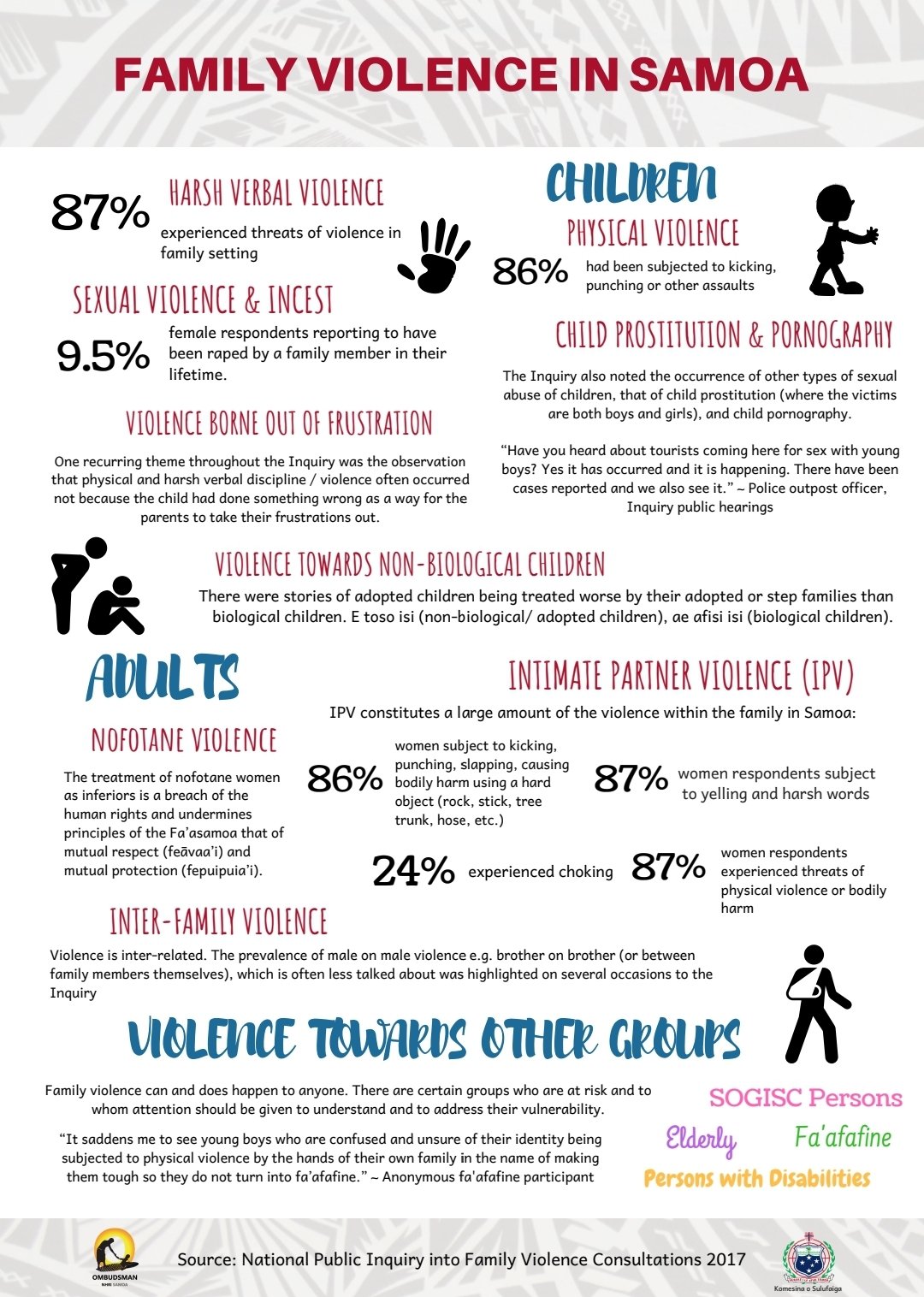 The most extensive and detailed study on Family Violence in Samoa was conducted by the National Human Rights Institute under the Office of the Ombudsman.

That reoort which includes detailed testimonies of victims and survivors across Samoa found that IPV (intimate partner violence) constitutes a large part of the violence in homes.

Of the 2/3 women facing IPV, 87% had experienced yelling and threats of violence, 86% had been subject to kicking, punching, slapping or being beaten by an object, while 24% are subjected to choking and 9.5% of female respondents reported to have been raped by a family member in their lifetime.

The National Public Inquiry into Family Violence Report 2018 recognises the complexities of the issues and includes a comprehensive list of 39 recommendations on practical actions to end family violence in Samoa.

The launch of the MWCSD national framework comes as Samoa heads into White Sunday long weekend. The SVSG Chair has issued a cautionary statement regarding the children’s weekend, as a high risk period from their experiences as practioner advocates over the years.

“As is often the case with holidays – crime and violence tend to follow. Even on White Sunday, many children are still not safe against harm and experience violence despite the meaning of this celebration,” says SVSG Chairperson Ms Georgina Lui..

“As a child safe organisation, Samoa Victim Support Group is always on the alert during this time of the year, in the interest of the children at risk of being abused in the home..

“Over the years SVSG has observed the increased risks of violent incidents during the White Sunday holiday; where children are either directly or indirectly impacted by the financial stress that the parents usually go through, in trying to cater for the children and their special day”.