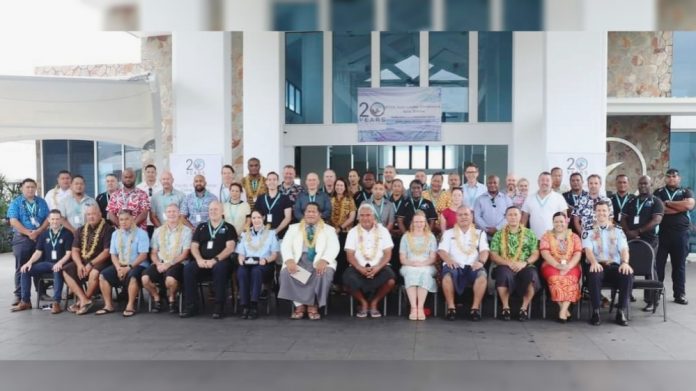 Samoa is this week hosting a Team Leaders Conference of the Pacific Transnational Crime Network at the Taumeasina Island Resort in Apia.

The Minister acknowledged and thanked the region’s law enforcers for their hard work and dedication.

Faualo stressed the importance of being vigilent and thanked the Pacific law enforcers for the courageous way they carry out their daily duties, often behind the scenes to keep the region safe.

Reverend Dr Siaosi Salesulu of the Vailele EFKS church led the prayer and delivered a spiritual encouragement from the Bible. As usual the charismatic Reverend Dr Salesulu had Samoa’s guests hanging on his every word as he captures their attention with one of his stories to introduce the Word of God.

Also in attendance was Australian High Commissioner to Samoa, Her Excellency Emily Luck. The Australian Federal Police (AFP) is a key partner to Samoa in the area of law enforcement with a four year partnership agreement signed in October 2021.

As Chairman of PTCN Samoa’s Police Commissioner Auapaau Logoitino Filipo had welcomed more than 50 members from around the region who arrived over the weekend to attend the 3-day conference.