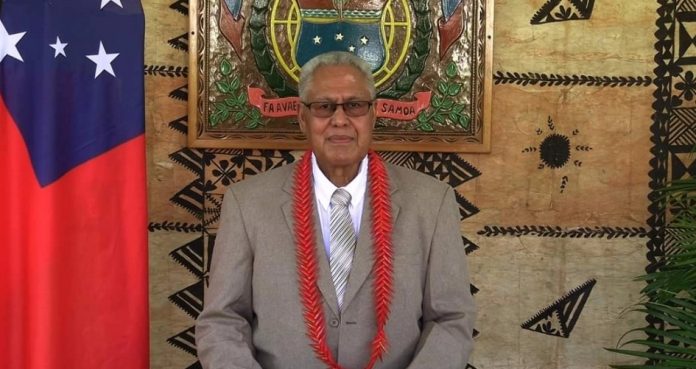 The Head of State has also revoked his Proclamation of Sunday 4th July 2021 where he declared there was no majority party to take over following the general election, and called Parliament to convene on Monday 2nd August 2021 at 9:30am, with conditions.

“If there are no solutions to the issues raised by the date set above (2 August 2021), then I shall look look into other relevant options”.

Tuimalealiifano then turns to the Court of Appeal decision to defend the role of the Head of the State.

Tuimalealiifano says the role of the Head of State is not just a ceremonial one as stated in the decision, but one that has been active during the State of Emergency in signing off on SOE orders, and now also in approving Government budget spending during the political crisis.

“What has been said about me is not easy to take..

“I humbly declare that I do understand the duties of the Head of State, especially in relation to the Courts because I worked as a police officer, I also worked in the office of the Attorney General.. I also worked as a lawyer, and it has been 53 years since I have worked and served the Government;

“I am receiving advice from not only the Office of the Attorney General, but also other senior lawyers in Samoa;

“I also understand customs and traditions of Samoa because I have been a matai for over 40 years;

The Head of State gives his blessing to Fiame and her Cabinet as well as the Speaker and all MPs of the FAST party already sworn in.

Tuimalealiifano then calls for the new Government to consider a convening of the XVIIth Parliament of Samoa under the usual process to swear in members of the Legislative Assembly.

The Head of State ended by calling for safety and peace, and the protection of God over Samoa.