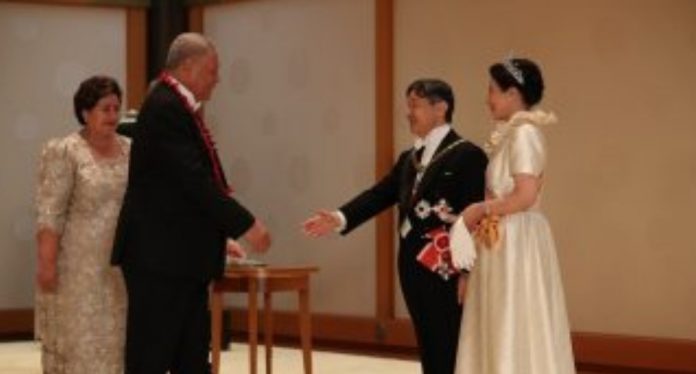 The ceremony was held at the Imperial Palace in Tokyo where their Highnesses were joined by 2,000 foreign guests from over 180 countries with over 400 VVIP guests including royal dignitaries, Heads of State and Government and international organisations.

A court banquet hosted by the Prime Minister was held on the 23rd October 2019.

Their Highnesses also attended a special Tea Ceremony for the 18 royal representatives, hosted by the Emperor and Empress of Japan at the Akasaka Residential Palace with members of the Imperial family, as well as a luncheon hosted by the Japan-Pacific Island Countries Parliamentary League whereby the Head of State delivered remarks on behalf of the Pacific delegations.

Japan declared the 22nd of October 2019 an official public holiday with many or the main roads in the Tokyo metropolitan area closed off for the official events that took place.

The Head of State and Masiofo are joined by Ulugia Mareko Tulouna, Private Secretary to the Head of State, Superintendent Soloi Iosefo Tuimaunei, Aide-de-Camp, and H.E Fa’alavaau Galumalemana Perina J. Sila-Tualaulelei, Ambassador of Samoa to Japan and Counsellor Justin Lima of the Embassy of Samoa in Tokyo, Japan.