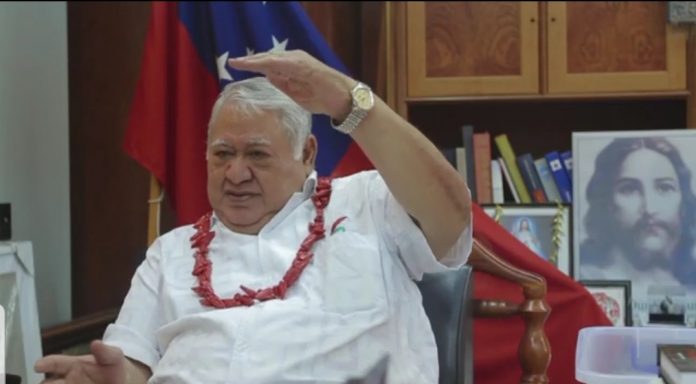 13 August 2019, Apia Samoa. Cabinet has approved a project to create a register of Samoans residing worldwide.

According to Samoa Prime Minister Tuilaepa Dr Sailele Malielegaoi, the register will record the country’s diaspora with particular focus on their achievements and contribution to Samoa’s development.

Says Tuilaepa, “It will be utilised as the informational database for Government to refer to in its deliberations on future national issues that will benefit Samoa”.

“It will also acknowledge Samoans based overseas for their accomplishments and contributions to the welfare of the country.”

According to the Prime Minister the register also aims to acknowledge Samoans who have excelled in the world stage in areas such as sport, politics, music, acting and the arts.

“Our people residing overseas are world renowned for their natural talents and flair in their respective careers and fields of expertise,” says the Prime Minister.

The Prime Minister referred to professional boxers such David Tua and Joseph Parker and world discuss champion and Olympian Beatrice Faumuina as examples.

The example of the emotions shown by Samoan World discuss Champion, Beatrice Faumuina while in Samoa for the opening ceremony of the Pacific Games was given by the Prime Minister.

“In tears during the opening Games ceremony Beatrice Faumuina there and then to me reaffirmed her pride;

“And for me she represents the patriotism of hundreds of our sons and daughters overseas who would give all to represent their country of birth and heritage,” he added.

Tuilaepa also referred to the work of comedians who use their platfirm to highlight the Samoan culture to the world.

“We have comedians who have highlighted our Samoan way of life, our struggle as a people and our journey of survival to capture our genuine Samoan way of life for the world to appreciate and respect,” said Tuilaepa.

Samoa has comedians such as the Laughing Samoans, Pani & Pani, Tofiga and shows like Fresh as well as popular individuals on social media.

“Samoa’s footprints in Hollywood is the latest historical chapter,” says Tuilaepa0 referring to the success of Seiuli Dwayne Johnson and the inclusion of Samoa in the Rock’s latest blockbuster Hobbs and Shaw.

Seiuli and his mother last visited Samoa over a decade ago where the late Head of State, His Highness Malietoa Tanumafili II personally bestowed Johnson, with the Honorary Seiuli Matai Title.