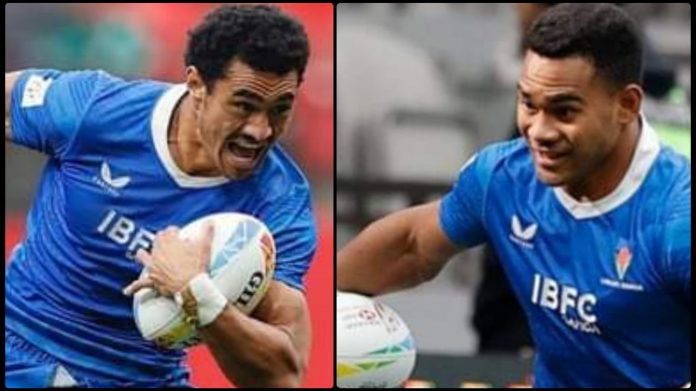 The men in blue representing Samoa on the 7’s world circuit have finished 4th in Toulouse after falling to host nation France, 17-12 in an extra time 3rd place play off.

The French have been in great form this weekend with the help of a home ground advantage and their vocal crowd backing them all the way.

France started the match with ball in hand and kept the ball for much of the next 7 minutes. The French punished Samoa for not securing the ball in the ruck area, turning over possession more than once.

The French launched wave after wave of attack, catapulted by Samoa conceding four penalties in the first four minutes.

Wearing white to allow their hosts to wear the blue jersey, Samoa’s defense did manage to hold off the French from turning all that possession into points.

When the Manu finally got the ball Steve Onosa’i Rimoni looked to try his trademark chip-and-chase which has seen him score on many occasions in just three tournaments. This time the French were ready for the kick and launched a counter attack from 80 meters out to take a 7-0 halftime lead.

Returning from halftime, Va’afauese Apelu Maliko lept into the heavens and came down with the opening kickoff of the second half. Samoa wasted no time with the ball and sent Owen Niue up the middle of the French defence. Niue was clipped by the ankles, but managed to execute a brilliant offload to find a flying Iafeta Purcell, who pinned his ears for the corner to score.

Samoa’s second try came from a carbon copy kickoff taken by Apelu Maliko. The backline stretched the French defensive line before switching back to Apelu Maliko who sliced through French defenders to score his 6th try of the weekend.

A 12-7 lead was not enough to put the French away infront of their home crowd.

All match long the French attacked Samoa in the ruck area and that is how they once again took possession of the ball.

They forced Samoa to overcommit to one side of the field and found an overlap for 23 year old Jordan Sepho to score in the corner after beating two more Samoa defenders.

The conversion was missed and the points were leveled at 12-12 with the game going into extra time.

In extra time the winner of the kickoff normally goes on to win the match and it was no different here. Despite Motu Opetaia’s best efforts, the French took possession of the kickoff.

The French side patiently worked their way downfield until they found the Samoans slacking on the left edge allowing Jonathan Laugel to stroll over and seal a 3rd place victory for the hosts.

The young all-local Manu 7s side have moved Samoa up by 5 places on the HSCB World Series standings from 15th to 10th after Toulouse.

Samoa will go on to London for the next leg of the HSBC World Sevens Series, their fourth tournament since returning to the circuit.