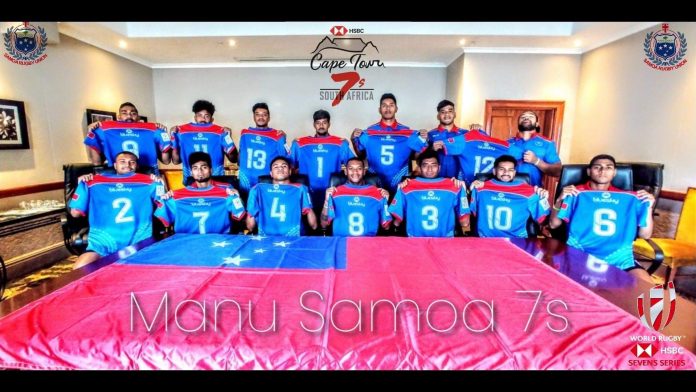 Samoa has lost all 3 pool games and now prepares to move into the 13th place play off on Day 3 of the Cape Town Sevens.

Just seven days ago Samoa finished 4th in Dubai  after a strong performance to kick off the HSBC World Sevens Series season.

A week later they have failed to win a pool match with losses to Kenya, Ireland and Australia.

The 28-14 loss to Ireland was described as “embarrassing” by Manu Samoa Sevens fans who took to social media with their frustrations, some calling for the resignation of the head coach.

Manu lacked structure and focus as they succumbed to an Irish side who have only just been relegated to the HSBC World Sevens Series.

Manu took the lead 7-0 in the 5th minute of the match with Ireland when Belgium Tuatagaloa sliced right through the middle of the Irish defence to score under the post.

The Sir Gordon Tietchens coached Samoa side looked to be able to add more points to their lead in the last minute of the first half but errors prevented that from happening.

Instead it was Ireland who leveled the game at 7-7 before half time when speedster Jordon Conroy left Joe Perez in his rear view mirror to score under the black dot.

Ireland came back more hungry in the second half to take the lead 14-7.  Manu Samoa was still in the game when Joe Perez looked to burst into space, but instead had the ball stripped from him by an Irish player. And just like that, Ireland were leading Manu Samoa 21-7.

But the pain for Manu Samoa fans did not end there. Just when Samoa thought things couldn’t get any worse, Ireland scored yet another try to extend their lead to 28-7.  The Boys in Blue managed a consolation try to put the final score at 28-14.

Samoa then lost to Australia 24-14 at 4am this morning. They play Spain at 4am Monday morning Samoa time for the 13th place play offs.