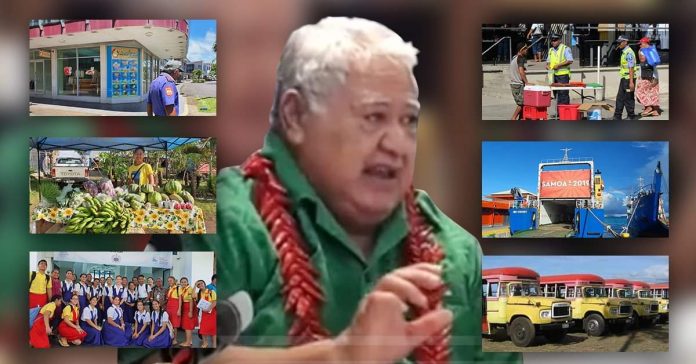 The Samoa Prime Minister Tuilaepa Dr Sailele Malielegaoi has today announced an extension of the State of Emergency for a further four weeks in efforts to safeguard Samoa from the deadly coronavirus pandemic.

A statement from the government press secretariat confirmed that His Highness the Head of State, AfiogaTuimaleali’ifano Va’aletoa Sualauvi II signed the extension into law this evening after consultation with Cabinet.

As set out in F.K. (20) Special 13 is “satisfied that a grave emergency exists whereby the health, security or economic life of Samoa is threatened by a catastrophe.”

Covid-19 has affected 204 Countries and Territories around the world. As of today, there are 1,015,877 confirmed cases of the coronavirus COVID-19 that originated from Wuhan, China, and a death toll of 53,218 deaths.

Samoa is one of the few countries in the world that is still COVID-19 free but increasing cases in New Zealand, Australia and Fiji have brought the virus too close to home. The country has just recovered from a measles epidemic that took months to bring under control, claiming close to 100 lives, mostly babies under 12 months old.

The Prime Minister says Cabinet is considering the wider impact on the nation, especially those who have lost their jobs due to the closure of Samoa’s borders as well as the general hold on all activities where there are crowds or more than 5 people.

However the Prime Minister says the advice from the National Emergency Operations Centre (NEOC) is for an extension to the State of Emergency for a further 4 weeks.

“The NEOC is looking at safety first, and the decision has been made based on the premise  prevention is better than cure”.

The details of the State of Emergency orders that will dictate life in Samoa over the next four weeks were not given by the Prime Minister, however he did give examples to suggest that there may be amendments such as shops opening from 6am to 6pm.

Samoa’s new orders will be announced next Wednesday; in the meantime the current orders remain in force until then.

The Prime Minister was speaking to government-owned media in a closed session that is televised live on the government facebook page.

In that regard Tuilaepa did not ellaborate on whether an economic stimulus package would address job losses and the extensive number of businesses at risk of closure and bankruptcy due to lack of economic activity.