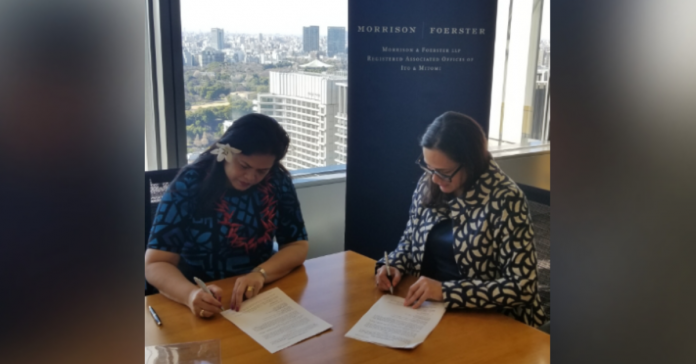 8 March, 2019 – Morrison & Foerster, a leading global law firm, has been named a Major Sponsor of the Manu Samoa ahead of their campaign for the Rugby World Cup 2019 in Japan. Her Excellency Fa’alavaau Perina J. Sila-Tualaulelei, Ambassador of Samoa to Japan and Ms. Louise Stoupe, head of Morrison & Foerster’s Tokyo Litigation Department and co-chair of the firm’s Commercial Litigation and Trial Practice Group, today signed the sponsorship agreement, at a ceremony.

Morrison & Foerster is the largest international law firm in Japan, with a total of 17 offices across Asia, the United States, and Europe.

Ms. Stoupe commented: “We are pleased to support the development of rugby in Samoa in the lead up to the Rugby World Cup in Japan. We are happy to play a part in Samoa’s aspirations as they prepare for the competition.”

The Chairman of Samoa Rugby Union and Prime Minister, Honourable Tuilaepa Lupesoliai Sailele Malielegaoi says, “We are grateful and delighted with the significant sponsorship investment that Morrison & Foerster is making today. Our build-up to this year’s Rugby World Cup has been greatly boosted by the firm’s investment in our Manu Samoa team’s preparations.”

The Chairman added, “Samoa Rugby Union is pleased that Morrison & Foerster recognizes and shares our determination to do well on the international stage.”

Today’s hand-over ceremony officially commences the partnership between the Samoa Rugby Union and Morrison & Foerster and comes after several months of discussions and negotiations facilitated by the Ambassador of Samoa in Japan with partners at Morrison & Foerster. It is a significant milestone in the Embassy’s efforts with local partners in Japan in advocating for strong support in the form of pre-camps and to generally assist the Manu Samoa 15’s on their road to the Rugby World Cup in September 2019.

Ambassador Fa’alavaau says, “We are humbled and blessed by Morrison & Foerster’s readiness to support Samoa in this way and I would like to convey our sincere appreciation to the firm for this significant contribution. I would also like to mention and particularly thank my dear friend Louise Stoupe of Morrison & Foerster for her unwavering support and for facilitating this partnership with her firm.”