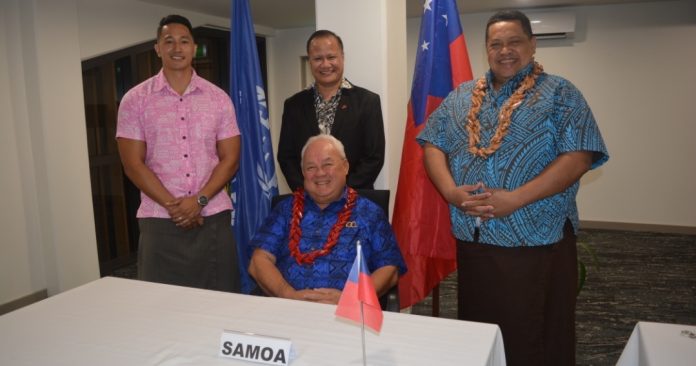 Samoa has been elected as co-chair of the Advisory Board for Jobs Initiative under International Labour Organization (ILO).

Samoa’s Minister of Commerce Industry and Labour (MCIL) Honourable Lautafi Fio Selafi Purcell is one of four Ministers of Labour on the Advisory Board representing America, Europe, Africa and Asia Pacific.

The other five members are representatives from the International Trade Union Conference (ITUC), International Organisation of Employers (IOE), UN Executive Office of the Secretary-General, ILO Office, and International financial institutions.

Hon Lautafi will be co-chairing the International Advisory Board with Hon Teresa Ribera, Fourth Deputy Prime Minister, and Minister for Ecological Transition and Demographic Challenge from Spain.

The International Advisory Board was established in 2015 following the Paris Agreement on Climate Change.

“Just Transition to sustainable development can power a human-centred approach to the future of work. It has the potential to transform economies and societies, maximize opportunities for decent work, reduce inequalities, and promote social justice through support to industries, enterprises, workers and communities affected”.

“A just transition matters for all countries, at all levels of development”.

To turn this human-centred agenda into concrete action, the United Nations Secretary General, Director General of International Labour Organization, leaders of Governments, Employers, and Workers organisations launched a Climate Action for Jobs Initiative at the United Nations conference on Climate Change held in Madrid, in December 2019.

The Initiative is intended to provide a roadmap to support and give effect to the commitments made by countries at the Climate Action Summit of September 2019.

The International Labour Organization has been identified to spearhead the implementation of the Initiative. The governance structure of the Climate Action for Job Initiative is the International Advisory Board, working alongside the Donor Group, International Technical Group, and National Steering Committees.

Honourable Minister Lautafi Purcell was also elected as a Vice Chairman of the Blue Pacific Big Ocean States (BPBOS), that was established last year at the High Level Ministerial Meeting in Port Moresby, under the endorsement of the ILO Director General, Mr Guy Ryder.

The Blue Pacific Big Ocean States is the Pacific Labour Ministers platform that pursues decent work and just transition through Climate Action for Jobs. The main focus is to strengthen the Pacific positions on their action plans, knowledge sharing on effects of Climate Change, and establish strategical direction for green jobs in the Pacific by linking employment to environmental action.