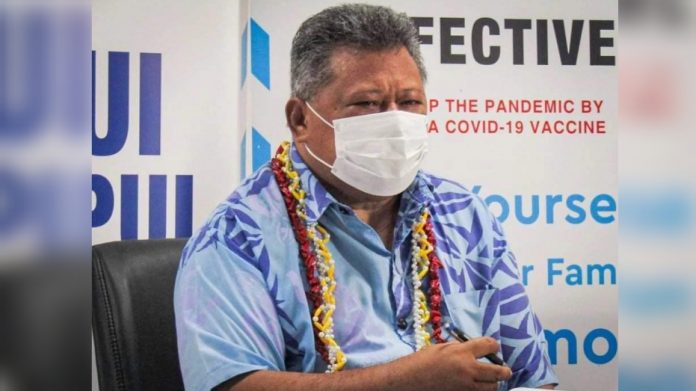 Monday 2 May 2022, Apia Samoa. Amidst Samoa’s efforts to contain the community spread of Covid-19, Director General of Health, Leausa Dr Take Naseri has taken a leave of absence which has so far, not been explained by an official government press release.

In response to questions regarding Samoa’s update situational report, the media have been told to direct questions to Tagaloa Dr Robert Thomsen who has been Acting Director General since Tuesday last week.

A credible source high up in the Ministry told Samoa Global News that Dr Thomsen is acting for two weeks, after which time, Dr Glenn Fatupaito will take over the reigns, also for two weeks. This rotational method where the leadership of the Ministry in the midst of Samoa’s pandemic crisis is passed between ACEOs was also applied when the Director General was recently overseas.

Leausa was on overseas medical leave in February this year, and had only just resumed work upon his return from New Zealand last month.

Sources within the Ministry have said they understand the Director General is not happy about an incident where his computer hard drive was removed during his absence during overseas medical leave.

“It is understood the Public Service Commission removed the hard drive during an investigation relating to procurement processes for the CT scan..”

Leusa was appointed by Cabinet in May 2019 and his three-year contract is up for renewal this month.

Messages for the Minister of Health Valasi Luapitofanua Tafito Selesele were left last week. When contacted again this morning for clarification on the status of Samoa’s Director General and CEO of Health – his secretary conveyed that Cabinet was sitting today, and he would be available on Tuesday, before Parliament for a comment.