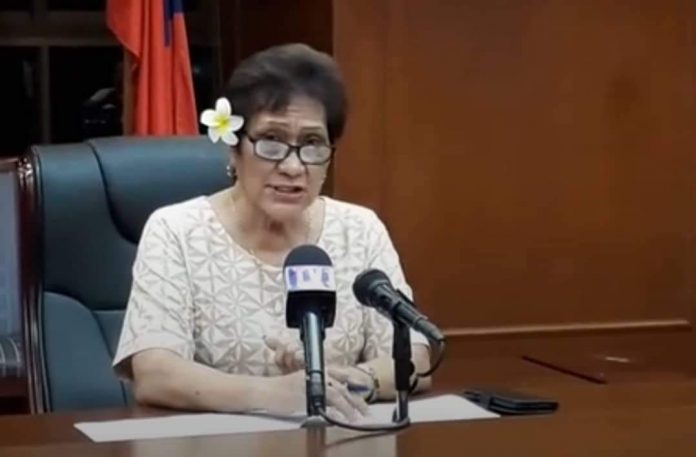 Samoa’s Acting Prime Minister Faimalotoa Kika Stowers has tonight announced the Proclamation of Emergency for the Outbreak and Spread of Measles in Samoa.

Faimalotoa who is also Samoa’s Minister of Health made the public announcement after an emergency meeting of Cabinet this evening.

The announcement calls for the immediate activation of the National Disaster Advisory Committee (DAC), due to meet tomorrow morning at 9.30am.

The Acting Prime Minister said more information about the implications of the declaration will be made available after the NDAC meets tomorrow morning.

The DAC is made up of all Cabinet Ministers, all CEOs and key Non Government Organisations and Civil Society Groups such as Samoa Chamber and SUNGO.

In making the announcement Famailotoa said the state of emergency declaration is not something that should bring fear or panic.

The Minister of Health called for national support to address the measles outbreak which has claimed 14 lives to date, mostly children under the age of three.

“It is not a time to point fingers and look for who to blame, but a time to work together to combat this epidemic,” said the Minister of Health.

She also thanked Samoa’s development partners making special mention of the people of New Zealand and Australia; Samoa’s traditional Pacific partners that step in at such times.

Samoa’s Ministry of Health had put a hold on the MMR vaccination after the tragic deaths of two babies in July last year. The Ministry then relaunched immunisations in April but members of the Expanded Program for Immunisation (EPI) who do outreach programs say the Samoan public never really regained confidence.

The implications of that 9 month hold on vaccinations is now being felt with the measles outbreak claiming lives of babies less than a year old.

New Zealand was first to declare an outbreak on the 1st of August 2019, and now Fiji, Tonga and American Samoa have also been affected.