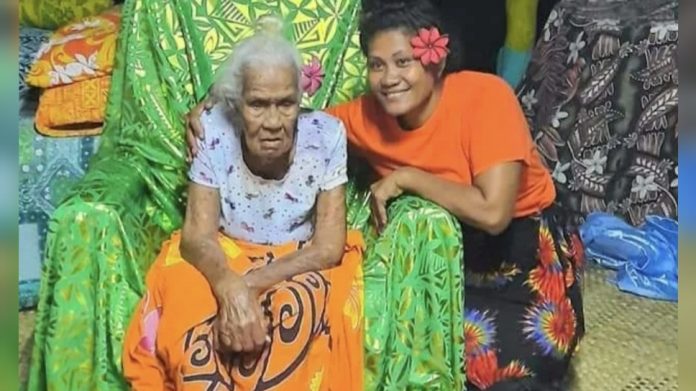 21 April 2022, Apia Samoa. As the nation continues to navigate the challenges of the covid-19 community outbreak, the family of Samoan centenarian Tele Semu, celebrated another year with their loving mama. Mrs Tele Semu of Tufulele turned 102 years old yesterday 20 April, and her family held an intimate ceremony at their home in Tufulele last evening to celebrate the occasion.

Born on the 20th of April 1920 at her home in Falevai Falelatai, Tele is the eldest of in a family of 12. Seven of her siblings have passed away, survived by Tele and four of her siblings.

Mama Tele married the love of her life, Taaloga Silivelio in 1950 and they had nine children. Tele and Taaloga were married 49 years until he passed away in 1999. She has lived with her children at Tufulele for the past 23 years since her husband’s passing.

Tele’s grand-daughter and namesake, Ms Tele Tito Aiataaloga spoke to Samoa Global News about how blessed they are to still be able to care for their mother, and be able to fellowship with her each day.

“Altogether there are 203 of us, born from our Mama,” says Tele Tito.

“Mama Tele was 25 when she had her first child in 1945, and her eldest child is still alive today.”

Three of Tele’s children live overseas and could not attend her 102nd birthday because of border closures and travel restrictions. One of her sons died aged 66 last month, before her special day.

Tele’s grand-daughter says her Mama is the easiest person to care for.. “she is not fussy with food, and appreciates anything that we make for her.”

“Her favourite food is seafood, especially if it’s fresh from the ocean, and she loves soup with lots of vegetables..”

Ms Tele Tito says her grandmother used to work for the Congregational Christian Church of Samoa (EFKS) at Malua, and this job had helped her to care for her children.

She says her grandmother continues to do her own chores around the house, and loves to go outside to weed her garden and the grass area infront of their home.

“Whenever she feels up to it, she would go outside and weed..”

There is a flood of social media posts by Tele’s grandchildren, posting happy birthday wishes for their beloved grandmother, all of them giving thanks to God for the many years they have been blessed with her.

Life expectancies in developed and developing countries alike have been rising continuously, according to the U.N. Population Division, causing the number of people who live to 100 years to also rise. Last year in 2021, the UN expected the number of centenarians to increase to approximately 573,000. The US boasts to have over 90,000 centenarians while Japan reported they’d reached 86,000 last year, 88% of them women.