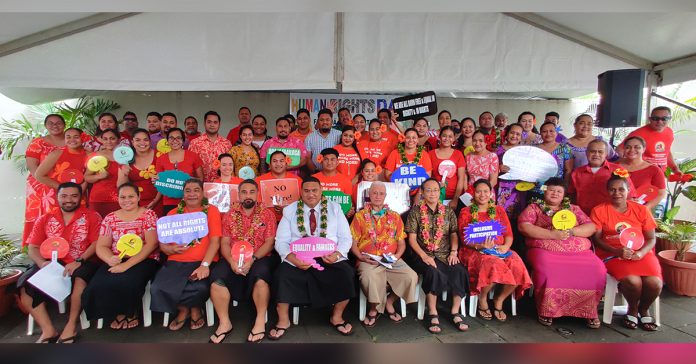 Every 10th of December, Samoa joins nations around the world to celebrate Human Rights Day.

The international day remembers the adoption of the Universal Declaration of Human Rights as a milestone document that asserts to every human being rights and freedoms we are all entitled to, simply by being humans.

It is also the last day that ends the 16 Days of Activism campaign to combat violence against women as an issue that constitutes a grave violation of human rights and remains one of the greatest challenges to achieving equality.

The Ombudsman Afioga Maiava Iulai Toma in his remarks recognised how human rights reminds us of simple values; the importance of being kind, having mutual respect for one another, equality and non-discrimination.

Competition 1 was a uniform colour coordination photo. Competition 2 required teams to produce a short clip to reflect the values of kindness, equality, non-discrimination, inclusive participation and mutual respect. Competition 3 was a Quiz on Basic Human Rights knowledge which engaged members of the public. The quiz was based on questions on freedoms and rights in Samoa’s Constitution, rights in contact with Police, as well as understanding linkages of human rights with work of various Government Ministry and NGOs.

The Quiz was conducted with the purpose of raising awareness on rights and responsibilities unpacking some common misconceptions surrounding the exercising of rights.

“We acknowledge the support of the public who joined the celebrations particularly the support of our Plaza community Offices Digicel, OEC, MPE, SPBD & Frankies Supermarket for their support”.