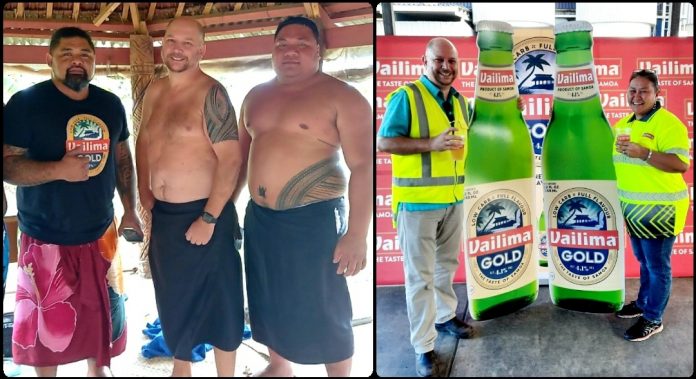 The Samoa Breweries aiga are sad to see General Manager Brent Adams leave after two years of service, and welcomes Ms Moira Simi to lead the team as Country Manager.

Mr Adams has announced he will be leaving the business on the 1st of November, to return to Australia.

Mr Adams moved from Coca-Cola Amatil Australia to become General Manager of Samoa Breweries in July 2019. During this time, Mr Adams has made a vast contribution to the business with the revival of the Vailima brand through increased awareness and visibility, wider and stronger range and share of Vailima and Coca Cola products in store, and huge improvement in quality of Vailima beer enticing new drinkers to trial and former Vailima drinkers to return to the nationwide favourite
beer, all resulting in a significant improvement in the financial performance of Samoa Breweries.

His success during his tenure at Vailima was not without its challenges – with the measles epidemic and COVID-19 pandemic making it extremely difficult to operate and drive sales under restricted conditions.

Mr Adams returns to Australia to join the Coca Cola EuroPacific (CCEP) Head Office as the Head of Planning and Go-To-Market where he will continue to support growth of CCEP and be able to be close to his family which is the primary reason for his return.

Mr Adams says his time has not been without challenges with worldwide border closures, and he will miss the Samoa Breweries family.

“It has been a great honour to serve as General Manager for Vailima Breweries. I have truly loved my time in Samoa. Amidst all the challenges we have faced, the Vailima aiga has worked together and taken care of each other and leading the team through this has been my number one priority always and I have been proud to be part of this aiga.”

“Ms Simi has the full support from the Paradise Beverages Team as well as the whole Pacific Team”.

Ms Moira Simi was previously the Sales & Marketing Manager for Samoa Breweries since March 2021 and prior to that, Head of Retail for Vodafone Samoa.

“Ms Simi brings a wealth of experience and expertise to the role, and with a strong sales background”.

To celebrate and remember Mr Adam’s time in Samoa, the Malofie Association gifted him with a traditional Samoan sleeve tattoo, using traditional tattooing equipment, known as the áu.

President of the Malofie Association Seiuli Lavea Hawaií Albert expressed his gratitude to Mr Adams for his continued support, and said that the tattoo gift was a token of their appreciation to him and
something to remember Samoa and Malofie by.