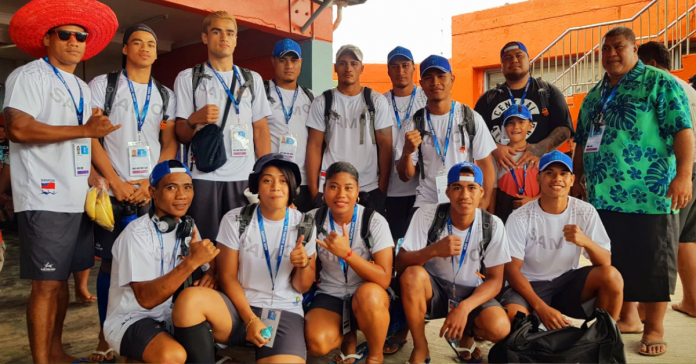 14 July 2019 Pacific Games Apia Samoa. The Samoa Boxing team left for Savaii today to compete in the Pacific Games held at the Don Bosco hall in Salelologa as a historical first for the Big Island.

Leading the Samoa delegation is Former All Black and Manu Samoa rugby international Tuigamala Vaa’iga Tuigamala who has dedicated himself to the development and promotion of boxing since moving back to Samoa. He is affectionately known as Papa Vaaiga to the team Samoa members.

Other coaches of Boxing Samoa are Laino Fatupaito and Tavui John Lemisio, all have worked tirelessly on a voluntary basis to get the team games ready.

The Samoa boxing team is made up of 8 males and a lone female boxer, Fa’aasu Loia who is being trained by none other than former heavyweight fighter David “Tuaman” Tua who has also been awarded a New Zealand Order of Merit (NZOM).

Fa’aasu Loia will be fighting in the 75kg division.

In the men’s division Samoa has eight boxers also ready to take on the challenge ahead including Commonwealth Games silver medalist Ato Plodzicki Faoagali.

There are also “No 2s” in the boxing team. They are training alongside the national team members, incase there is an injury or a boxer has to pull out unexpectedly. The No.2 or spare fighter will then step up. It is unlikely that they will get to participate in the Pacific Games, but these dedicated boxers still train hard “just incase”.

The Samoan boxing team is captained by veteran Hugo Fata who was 21 years old when he boxed for Samoa in the 2007 Games, where he beat a Tahitian to win the Gold medal in the 69kg division.

In the 2015 Pacific Games in Papua New Guinea, Hugo won the Silver medal in the 81kg division sucumbing to New Caledonia in the final.

This time Hugo Fata is fighting in the 91kg division and says that compared to previous Pacific Games and Mini Games he has boxed in, this is the best preparation Samoa has ever had.

“Going to China has really taken our preparations to another level. We are really well prepared. The team is one heart and one spirit.” 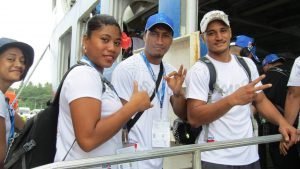 The team captain says that when they left for China he was playing rugby and weighed 102 kgs but after training in China for 3 months, he is now 85kgs.

He also said that boxing was very different from rugby because when you mess up in boxing, there is no one to blame but yourself. In a team sport like rugby, you can share the blame with all the other players.

All Pacific Games boxing teams were loaded onto the 4pm Lady Samoa II sailing this afternoon, greeted by the friendly staff of the Samoa Shipping Corporation

Boxing starts on Tuesday with finals and medal ceremonies planned for Friday. Savaii hotel owners in the Salelologa area confirm that rooms are booked out and they’re looking forward to the influx of visitors.