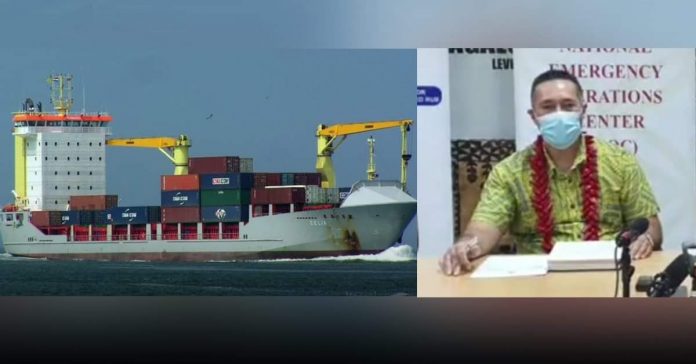 The voyage of cargo freighter MV Island Chief due to have arrived into Samoa on the 7th of December has been postponed indefinitely following the positive test results of two of its crew members.

This was confirmed by Samoa’s NEOC National Controller and Chairman of the Disaster Advisory Committee, Agafili Tomaimano Shem Leo during a media briefing yesterday morning.

The sailors had been tested in Fiji because of Samoa’s border control requirements – that negative test results must be presented for all crew members onboard freight vessels.

“In line with our border control restrictions and protocols, Samoa has closed its borders to the voyage of MV Island Chief”, said the Head of Samoa’s National Emergency Operation Centre.

The cargo ship is due to deliver many imported goods and supplies in time for Christmas, however, Agafili has made Samoa’s priorities clear.

“Due to the fact that two crew members of this ship have tested positive for COVID 19 there is no plan to accept it to dock here on our shores,” said Agafili.

Agafili added that Samoa will reconsider its position with regards to expected cargo and supplies, once safety is assured.

“Updates will be given out as soon as the isolation period for these two sailors is completed,” Agafili added.

The Fiji Times reports that Fiji’s Ministry of Health and Medical Services permanent secretary Dr James Fong said the two men have not been classified as COVID-19 border cases yet, because officials were awaiting information on whether the individuals were tested positive in another country in the past.

He said the vessel arrived on December 2nd at Lautoka Port to deliver cargo and then proceeded to Suva Port.

“The information we have at the moment, none of the crew left the vessel in Tonga, the MV Island Chief had arrived in Nuku’alofa from New Zealand.

“During that time in New Zealand, the vessel underwent crew change, where individuals were flown in from other countries. Our current information that all crew underwent the 14 days quarantine before the vessel departed.

“The two crew members who were tested positive have been hygienically transferred to Navua Hospital and will be staying at the isolation ward.”

He said the remaining crew members were under quarantine inside the vessel under heavy police guard.

“No crew member onboard the MV Island Chief  disembarked the vessel.”