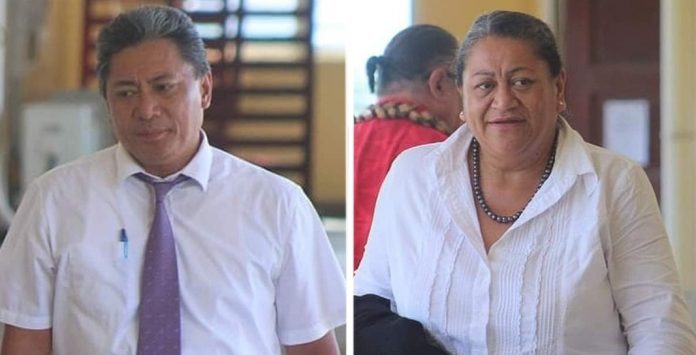 14 May 2021, Mulinuu Courthouse, Apia Samoa. A landmark case questioning the validity of a writ issued by Samoa’s Head of State to revoke the nation’s 9th April 2021 general election and call fresh elections was heard in a substantive hearing in the Supreme Court of Samoa today.  The judicial panel led by Chief Justice Satiu Simativa Perese assisted by Justice Vui Clarence Nelson and Justice Tafaoimalo Leilani Tuala-Warren, will deliver their decision next Monday 17th May 2021 at 3pm.

There are four Applicants seeking the Court to reject the Head of State’s revocation order, all represented by Latu Lawyers with former Attorney General, Taulapapa Brenda Heather-Latu as lead Counsel and Benjamin J Keith, Barrister from Thorndon Chambers in Wellington participating via video link. Mr Keith’s father, Sir Ken Keith was a Judge on Samoa’s Court of Appeal in the 1982 Saipaia Olomalu Constitutional case.

The first Applicant being all 26 FAST MPs, while the second Applicant is the FAST political party itself.  The third Applicant is Luātua Semi Epati – a matai who wished to stand as a candidate in the elections but is unable to, while fourth Applicants to the challenge are two registered voters Saina Tomi Setu and Afamasaga Toleafoa –  both voters who describe their efforts to vote last time, and how they will be inconvenienced should there be another election next week.

The Office of the Attorney General (AGO) and the Office of the Electoral Commissioner (OEC) are the first and second respondents represented in Court by three New Zealand lawyers zoomed in by video link. The team was led by Michael Richard Heron QC; former Solicitor General of New Zealand and former CEO of the Crown Law Office who is also admitted as a solicitor in England and Wales – aided by Paul Thomas Rishworth QC, and barrister Charlotte Elizabeth Mart Agnew-Harrington.

The bulk of the arguments were put forth by Counsel for Applicants Taulapapa Brenda Heather-Latu and Counsel for HRPP Aumua Ming Leung Wai.

The first and second respondents’ Queens Counsels submitted several case law and examples from other jurisdictions where a Head of State’s reserve powers were applied. They put forth detailed  arguements relating to sections of the Constituon under which the Head of State can exercise powers in relation to Parliament.

Taulapapa argued Samoa’s Constitution does not confer powers upon the Head of State to revoke a general election and asks the Court to instead uphold the 9th April result.

“What we are asking the Court to do is simply to reject that “revocation” and instead uphold the election result and start the clear constitutional and parliamentary process”.

Counsels for the Respondents, on the other hand, argued Samoa’s Head of State has reserve, or prerogative powers similar to those of a King or a Queen, to be exercised during unprecedented times of emergency; and when exercised in such a manner, even the Court is unable to interfere by the principle of justiciability.

Taulapapa Brenda Heather-Latu said this case is about nothing other than respecting and protecting the decisions made by the people of Samoa just a few weeks ago when the nation went to the polls.

“There is a basic truth about elections in representative democracies. In elections, the people decide.. and the people’s decisions – the votes they cast and the representatives they choose – are right”.

The former Attorney General argued the writ issued by the Head of State completely ignored the election process of a parliamentary democracy set out in the Constitution, adding there is no such thing as a ‘revocation’ of a General Election in Samoa’s Constitution.

“There is a power of dissolution – when the elected Members have been put to work and have not been able to form a Government, but that is a last resort, not a first”.

Taulapapa said it is true that for the first time in decades, the recent elections did not produce a simple result but added that that is the nature of multiparty politics. “Although it is unfamiliar for our elected representatives, it is not startling.”

“The Head of State’s advisers have told him that he can simply revoke the 9th April election – say it did not happen – and that another vote, held at almost no notice and under necessarily difficult and unfair condition, must be held”.

Writ issued because Samoa was experiencing an emergency

Counsels for Respondents argued the writ was issued by the Head of State because Samoa was under extreme circumstances of emergency. It was their position that Samoa is facing unprecedented times, and the Head of State therefore had no choice but to exercise his prerogative powers to ensure the peace and stability of the nation.

“That is why it is necessary that our Head of State should have prerogative powers, exactly for this types of situation..” said Aumua Ming Leung Wai.

Counsel for FAST, however, disagreed that Samoa was in any sort of emergency, nor did the people of Samoa need to be ‘protected’ from their own decision – as Counsel for the Attorney General had suggested in their written submission.

Taulapapa set out two reasons to argue her point that Samoa was not in an emergency that necessitated the Head of State’s extreme actions..

“The first reason it is not an emergency is that the Constitution provides exactly for what to do to form a new Government; the Parliament is convened, and the people’s elected representatives get on with their job. It is their responsibility to form a government and, if they ultimately fail to do so and a new election is needed, they answer to the voters. That is what happens in any Parliamentary democracy and it is what Articles 52, 63 and 64 of the Constitution require”.

“The second reason that it is not an emergency is that we do not yet know the end result of the 9th April election. The Court will decide the Article 44 case this coming week, and that may alter the result…”

Aumua argued that it was the Head of State’s responsibility to ensure no matter what emergency applies, the work of the Government carries out smoothly.

“We submit your honor that the constitution has not provided for every situation.. and that’s what we are seeing right now with this unprecedented mess, and that’s why it is necessary that our Head of State should have prerogative powers – exactly for these types of situations,” Aumua told the Court.

Prerogative Powers of Head of State

Aumua put to the Court that the Head of State of Samoa had prerogative powers not unlike those of a King or a Queen of England. It is Aumua’s position that English common law applies in Samoa citing Article 111 of the Constitution, under the interpretation of “Law”.

“It therefore follows our submission, your Honour, that our Head of State has all the power and privileges applicable to the crown in England. Such powers are known as prerogative powers or royal prerogative or reserved powers, where they relate to governor generals and countries that are part of the Commonwealth,” Aumua told the Court.

Aumua acknowledged the Head of State’s prerogative powers would be limited by the Constitution in the event that they are exercised in a way that were inconsistent with the Constitution or other Samoa Laws.

“The Constitution states that the English common law applies in Samoa, and through that the prerogative powers pertaining to the Crown, which we submit, our Head of State obviously has”, said Aumua.

Justice Nelson observed, “We’ve never had a monarchy in this country”, and asked Aumua if the Queen were appointed by the British Parliament, as was the case by Samoa’s Head of State.

Aumua argued the process of electing a Head of State did not affect his prerogative powers.

”Common Law applies irrespective of how he is elected,” said Aumua. “The powers that the King or Queen of England has, applies to our Head of State… Common Law applies unless we have statutes or laws that negates this, and there is no statute or law that says prerogative law does not apply”.

Justice Vui asked Aumua if he did not see a conflict of interest in any reserve powers activated by the Head of State, given it was a position elected by Parliament every 5 years.

“I don’t see any conflict at all”, said Aumua.

No comparative mention was made during arguments to the fact the Queen’s legal representatives such as the Governor Generals of NZ and Australia, were elected officials who served fixed terms.

The Function of the Court under Article 47

Taulapapa highlighted the constitutional role of the Court under Article 47, and said the issued writ not only ignores the role of the Court to settle any questions that may arise in relation to the validity of a Member of Parliament.

“The Constitution provides in Article 47 for the Courts to decide disputes about elections, and it must be allowed to do so,” said Taulapapa.

“There is mention of this Court’s function under Article 47, but only to say that the Courts ought not to be allowed to do their job”, said Taulapapa.

During his address that accompanies the writ, the Head of State had said of the Court…
“Political leaders and supporters on both sides have laid serious accusations against the impartiality of the Court, lessening the appearance of that arm to discharge its constitutional and common law functions to interpret and apply our laws. Whatever the outcome of the petitions, the decisions of the Courts will be questioned and viewed through that prism”.

The Supreme Court will deliver its decision Monday 17 May 2021, at 3pm.

The Supreme Court will also be delivering its decision on an earlier FAST challenge, seeking the correct interpretation of Article 44 of the Constitution, that would ultimately determine if the additional seat handed to Aliimalemanu Alofa Tuuau that essentially created a hung Parliament.