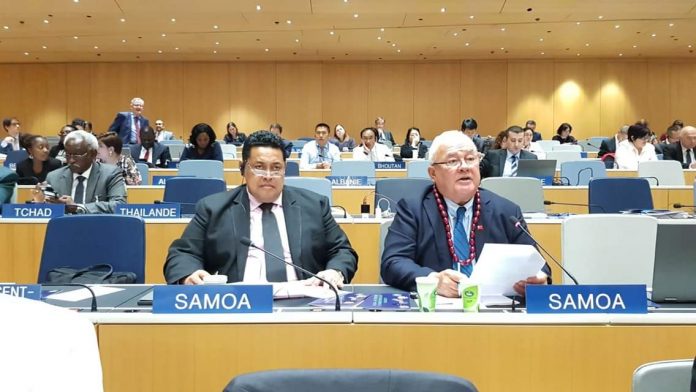 The Honourable Lautafi Fio Selafi Purcell delivered the Opening Statement for Samoa on the first day of the 59th General Assemblies of the World Intellectual Properties Organisation (WIPO) member countries which is being attended by more than 90% of its 192 member states.

In his statement the Honourable Minister thanked the Director General for the continuous support from WIPO with regards to intellectual property work in Samoa. He thanked all the different divisions of WIPO that assisted Samoa in her accession to the Madrid Protocol in December 2018 and the preparatory work for upcoming accessions to the Patent Cooperation Treaty, the Geneva Act to the Hague Agreement and the Geneva Act to the Lisbon Agreement.

Samoa becoming a member of these important Agreements will help simplify and make the international registration of trade marks, inventions, industrial designs, geographical indications and appellations of origins affordable.

This will no doubt encourage local businesses to register their intellectual property interests abroad in countries who are members of these Agreements.

The accession to these Agreements also aim to increase foreign registrations of such intellectual properties in Samoa.

The Minister also acknowledged and thanked the Governments of Australia, South Korea and Philippines for the support for the Registry of Companies and Intellectual Properties through their respective National IP Offices.