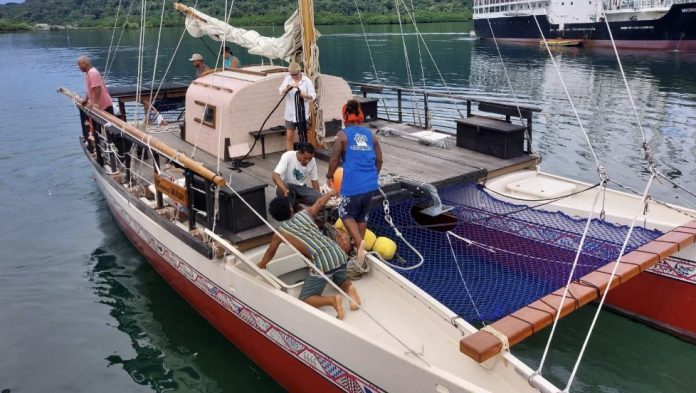 Vaka Motu Okeanos Waa’Qab voyaging canoe is expected to arrive in Samoa next week on route to the Cook Islands.

President of Aiga Folau, Samoa Voyaging Society, Memea Lyvia Black confirmed in a press release that the winds have dropped dramatically causing a slight delay in the voyage.

“And being a traditional sailing canoe, it is very much wind dependent, and steered by a massive sized foe,” said Memea.

“It means their expected arrival this weekend has now been rescheduled to next week”.

Okeanos Waa’Qab is under the command of Pwo master navigator Captain Jerry Joseph, who grew up on the island of Satawal learning the skills of traditional navigation from his grandfather, the renowned grandmaster navigator Mau Piailug.

Also on board are Pounamu Tipiwai-Chambers from Aotearoa and Raus Clyde and Vickson Yalisman from Yap, FSM and Alice Mason from Spain.

The vaka, to be used as a training vessel in the revival of traditional voyaging skills will stop over in Samoa before making its final journey to the Cook Islands.

Okeanos fleet commander, the Cook Islands Pwo master navigator Peia Patai was unable to join the crew on this voyage since having to meet several vaka related duties and responsibilities in Micronesia after a two-year lapse caused by the Covid outbreak.

The Okeanos Waa’Qab is a double hulled voyaging canoe, 15m x 6.2m in length and width.

The Okeanos Waa’Qab left Yap, Federated State of Micronesia on 1st September. It made a brief stop in Pohnpei, before it journeyed on this leg to Cook Is via Samoa.

Memea says the crew are in high spirits, and anticipating their arrival in Apia.

Families and fisherfolks in the North coast of Savaii are encouraged to wave a lavalava when you spot the Okeanos Waa’Qab next week.

The President of Aiga Folau acknowledged all who have worked with the NGO to organise the vaka’s stop over.

“We extend a big fa’afetai tele to Transam Samoa for taking care of the arrival formalities for the Okeanos Waa’Qab,” said Memea.

“We thank Samoa Ports Authority, Samoa Tourism Authority, our Government agencies such as Customs and Immigration for their prompt professional service to our enquiries,” added Memea.

Aiga Folau, or Samoa Voyaging Society encourages our people, especially youth groups to become involved and learn our ancestral traditional voyaging navigation. It is a character building skill, that teaches us sustainable lifestyles.