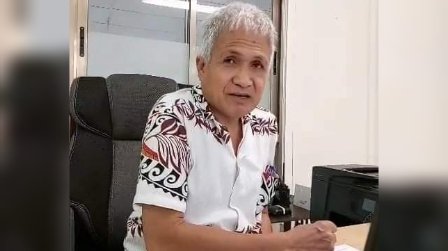 Total refunds to Samoa Airways customers who had paid for travel before the airline was left with no aircraft, will amount to $8 million tala.

In an interview with Interimn CEO, Fauoo Fatu Tielu, he said over 300 airline tickets have been refunded to date, amounting to $690,000 tala.

“I’ve just checked and that is the total amount of refunds I have approved, with another estimated $990,000 tala worth of refunds to be paid out next week.”

“But we expect total refunds to be paid out to reach $8 million tala,” said Fauoo.

Samoa Airways had launched its own user-friendly online booking portal through its website, and Fauoo says the $8 million tala is the total amount of airline tickets sold to customers before the government confirmed its decision to return the expected aircraft.

“The total refund amount will reach $8 million tala,” said Fauoo, “but they are being paid out as we receive funds from government”.

The interim CEO said the payment of refunds to all who have been inconvenienced is a top priority for the airline at this time, however, he adds that cashflow is a challenge, as refunds are being paid out as funds are received through government assistance.  (“O loo fua i seleni o loo fesoasoani mai ai le Malo”)

According to Fauoo, travel agents are also waiting on refunds for their customers. “Some agents have submitted claims ranging from 20 up to 50 tickets.. but we are trying to work through them all.”

In addition to refunds, Fauolo says another cost has been redundancy packages paid out to staff members when the airline cut back its operations during lockdown. He said close to $3 million tala was paid out as redudancies and to cover empoyer obligations to 50 staff who had been laid off. According to Fauoo, there remains a total of 140 staff currently employed by Samoa Airways.

Samoa Airways continues to operate twin otter planes between Samoa and American Samoa, as well as flights between Tutuila and Manua. The ground check-in services at Faleolo Airport for international flights are also operated by Samoa Airways.

The latest financial reports avaialable for the national airline on the Ministry of Public Enterprises website are accounts for 2016, showing a nett profit of $4.6 million tala representing 19% of total its $24.1 million tala in revenue, with expenditures of $19.2 million.