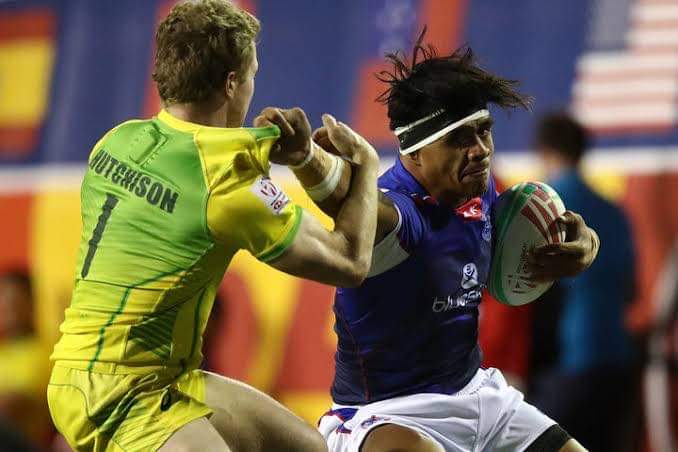 Samoa has beaten Australia for the first time in seven years to advance to the semi final of the Dubai Sevens.

A tearful Tomasi Alosio dedicated the win to Samoa, remembering the nation’s struggle to combat a measles outbreak that has claimed 65 lives, mostly children under 5.

“Wherever we end up in this tournament, just everything from here on in, we dedicate it to the people back in Samoa…. especially those who are suffering from the measles epidemic.”

Samoa crossed the tryline first and early. A break by Captain Tomasi Alosio put the Australian defence under pressure.  Belgium Tuatagaloa took full advantage and strolled over right under the post to take a 7-0 lead.

Australia put together a good set of phases and found themselves one meter away from the tryline.

Under pressure, Paul Perez blatantly got in the way of an Australian pass earning himself a yellow card and giving away a penalty try.

With the scores tied at 7-7, Samoa became lazy as five players stood and watched while Australia ran away with the ball. Paul Scanlan tried his best to prevent a try but the overlap put Australia over to lead 14-7 at half time.

From the second half kick-off Tofatuimoana Solia powered his way through the Australian defence to put Samoa in prime field position. Joe Perez redeemed his earlier yellow card with his trademark fancy footwork that made the Australian defense look silly. He crossed over to score under the post.

With scores tied at 14-14, Australia received a yellow card for tackling a man in the air off a perfectly placed Manu Samoa kick off.

Samoa capitalised on the six-man Australian side and Joe Perez scores his second try which is sure to put him into Stui’s Good Books for now.

Leading 19-14, Samoa’s defence was under pressure as Australia launched a relentless phase-after-phase attack.

The boys in blue must have heard the nervous yells and screams of their people towarda TV screens all across Samoa, and countrymen all around the globe.

With no time on the clock and Australia still attacking in Samoa’s half, Tofatu Solia secured the ball in a ruck to win Samoa a penalty, and ultimately the match.

Samoa will face off against South Africa in the Semi-Finals at 1:22am (Samoan time).