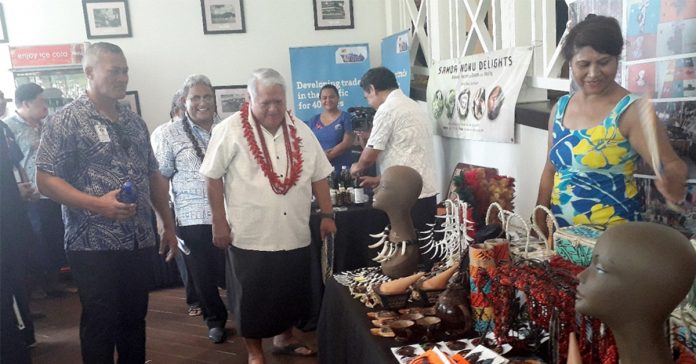 Samoa has requested the Government of China for a feasibility study for a Bilateral Free Trade Agreement to facilitate our trade arrangements and assist our exporters with rising costs.

The Samoa Association of Manufacturers and Exporters, (SAME) is receptive to the initiative by the Government of Samoa initiated by Prime Minister Tuilaepa Sailele Malielegaoi.

The President of SAME Tagaloa Eddie Wilson said that this initiative is well aligned to the Samoa Export Plan 2016-2020 which outlines the main objective of achieving $100m in domestic exports by December 2020.

“There has been significant improvement in the performance of the export sector over the last three years;

“At the time of launching the SAME-Samoa Export plan 2016-2020 in December 2016 annual domestic exports stood at approximately $35m,” said the SAME President.

“As at July 2019 domestic exports were close to $90m on an annualized basis. On present levels of monthly exports we would expect to achieve our objective of $100m by December 2019,” added Tagaloa.

Central Bank of Samoa reports confirm the continuing growth in exports, reporting that in the first seven months of 2019, domestic exports are 78% ahead of the same period in 2018.

Tagaloa says SAME and its members stand by to work closely with Government in trade negotiations.

The Prime Minister Tuilaepa used the opportunity during the launch of the 3rd China Pacific Countries Economic Development and Cooperation Forum to convey the message to the People’s Republic of China.

Prime Minister Tuilaepa Sailele Malielegaoi in his remarks to launch SAME’s Buy Samoa Made Export Exhibition to China at Aggie Greys Sheraton Hotel said,  “The Samoa Government is very encouraged by the steady increase in Export Growth and the fact the 1st Export Plan launched by the Samoa Association of Manufacturers & Exporters and the Government of Samoa in 2016 has been a great success- achieving 90% this far before 2020.”

“In this connection I am pleased to announce that the Government of Samoa and the Samoa Association of Manufacturers will soon launch the Samoa Export Plan II – in early 2020 targeting a further increase in Samoa Exports a further 3 fold to $300m by 2025.”

“This is an ambitious target and will only be achieved with the support of our trading partners.”

The Prime Minister commented that it is encouraging to note that the substance of that growth has come from agricultural and fish exports.

With the benefits from the various government replanting initiatives, it is expected that exports will continue to grow resulting from the improved supply as the planting program mature.

The Prime Minister added that In addition to the growth in exports we are also seeing a degree of diversification towards markets such as China, Korea and USA, as well as traditional markets – New Zealand and Australia.

Samoa’s growth comes significantly from a focus on improving standards and the attaining of certification of our production processes to international standards, such HACCP and ISO Certification- a very necessary requirement to enter export markets and comply with bio security requirements at the border.

The Government Plans to establish a commercially viable Port/Hub at its Industrial area at Vaitele – to increase shipping services for Traders and Exporters – thus contributing to enhancing Samoa’s competitiveness in global exports market.