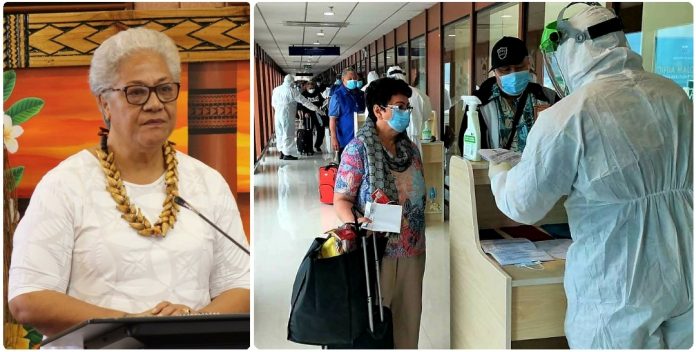 Wednesday 4 August 2021, Apia Samoa. The safety of the people of Samoa and continued protection of Samoa’s borders from the global coronavirus pandemic will be placed at the centre of negotiations towards possible travel bubbles between Samoa and American Samoa, as well as Samoa and New Zealand.

This was the response from Samoa Prime Minister Fiame Naomi Mataafa to criticisms from the leader of HRPP, Tuilaepa Sailele Dr Malielegaoi who issued a warning through a media release earlier this week, suggesting the move was linked to pressure from the business community.

“We cannot risk our people’s lives for the sake of making a profit for some business people”, said Tuilaepa, who has repeated the same warnings on TV1 throughout the week.

Fiame, however, clarifies that the Cabinet directive to explore the possibility of a travel bubble was made after consideration of submissions and recommendations from Samoa’s National Emergency Operations Centre (NEOC).

“No doubt there are many factors to consider,” said Fiame, “and uppermost of course, is safety of our people”.

Fiame confirms that Prime Minister Jacinda Ardern had expressed a direct interest in a travel bubble with Samoa, and noted the recent announcement that as of September, seasonal workers from Samoa would be allowed into New Zealand without having to go into managed isolation.

On Monday afternoon, Ardern confirmed her Cabinet had made the decision to allow Recognised Seasonal Employer (RSE) workers from Samoa, Tonga and Vanuatu to travel one way, without using MIQ.

“Prime Minister Adern had flagged with me an interest to begin discussions on travel between our two countries and the RSE option which will become operational in September,” said Fiame.
“The Foreign Affairs Ministry will take the lead on negotiations,” says the Samoa Prime Minister and also reminds that, “New Zealand currently has a travel bubble with the Cook Islands and Niue”.
Samoa has registered no community cases since the global outbreak, and the only covid-19 positive case was a young man who arrived from Los Angeles, and remained in managed isolation until his full recovery. Samoa’s borders have been closed since March 2020, with the exception of repatriation flights to bring home stranded citizens, students and seasonal workers.