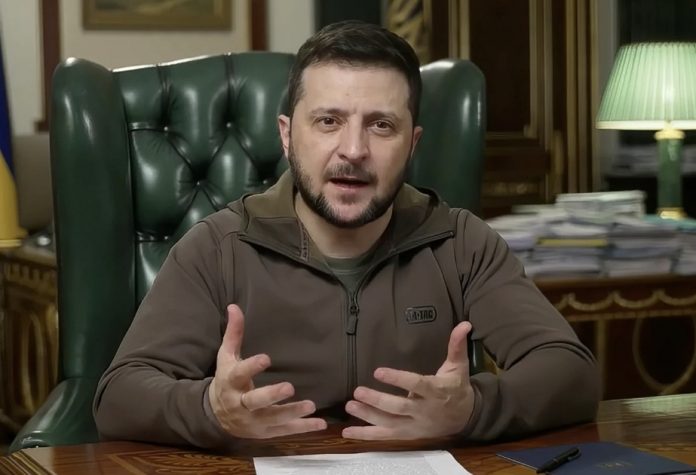 Aljazeera, 4 May 2022. Ukrainian President Volodymyr Zelenskyy has said his country could not accept a deal with Moscow that would allow Russian troops to remain in occupied territory.

Zelenskyy said Ukrainian forces had halted the Russian offensive in what he described as the first stage of the conflict. In the second stage, he said, Ukraine would expel Russian troops from its territory and in the third, would move to fully restore its territorial integrity.

Zelenskyy said he would not accept a ceasefire deal that would allow Russian forces to remain in their current positions ‒ insisting that “we will not accept a frozen conflict” ‒ but gave no further details as he addressed the Wall Street Journal CEO Council Summit on Wednesday.

He warned that Ukraine would be drawn into a “diplomatic quagmire” like the peace agreement for eastern Ukraine that was brokered by France and Germany in 2015.

In 2014, Russia annexed Ukraine’s Crimean Peninsula and cast its support behind a separatist rebellion in the Donbas region, Ukraine’s eastern industrial heartland.

Russian President Vladimir Putin has named Ukraine’s recognition of the Russian sovereignty over Crimea and its acknowledgement of the separatist regions’ independence as key conditions for halting hostilities.

Zelenskyy emphasised that Putin must agree to meet him to negotiate any deal to end the fighting.

He said it was important to continue talks, but noted, “Until the Russian President signs it or makes an official statement I don’t see the point in such agreements.”

Zelenskyy’s comments came as Ukraine’s defence ministry said Russia was attempting to increase the tempo of its offensive in the east of the country.

He also said Russian artillery fire and air attacks were continuing periodically on the Azovstal steelworks in Mariupol where the last Ukrainian defenders of the southern port city are holed up.

“Russia’s military command is attempting to increase the tempo of its offensive operation in eastern Ukraine,” Motuzyanyk told a briefing.

He said Russian strategic bombers had fired 18 missiles from the airspace above the Caspian Sea at targets in Ukraine “with the aim of damaging our country’s transport infrastructure”.

Russian forces have turned their heaviest firepower on Ukraine’s east and south after failing to take Kyiv, the capital, in the first weeks of the war.

When asked about the situation in the Azovstal steelworks, Motuzyanyk said there had been more Russian attempts to storm the plant.

Asked about the situation at the steelworks, Kremlin spokesman Dmitry Peskov said: “The order was publicly given by the supreme commander [Putin] to cancel the storming [of the plant]. There is no storming.”

“We see that there are escalations associated with the fact that fighters are taking up firing positions. These attempts are being suppressed very quickly, there is nothing else to say at the moment,” the Kremlin spokesman said.

An estimated 200 people are thought to still be trapped in Mariupol’s Azovstal steel plant, with little access to food or water.

Russian President Vladimir Putin has said in a statement on Thursday that shelling of the southeastern city will only stop when Ukrainian troops surrender.

The Kremlin’s bid to capture the whole of Mariupol is likely linked to Monday’s annual May 9 “Victory Day” celebration, according to the U.K. Defense Ministry.