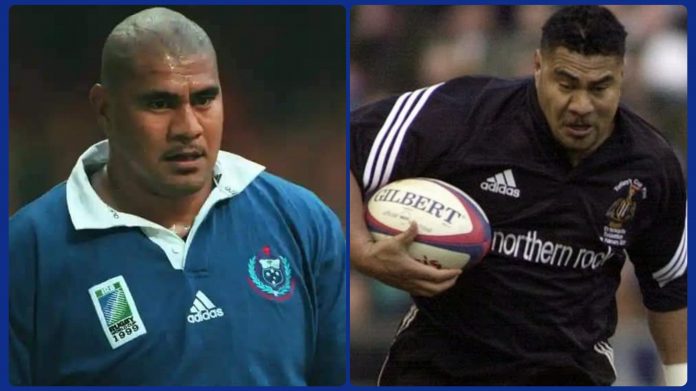 Former All Blacks and Manu Samoa legend, Tuigamala Va’aiga Tuigamala, has passed away in Auckland, aged 52. Gone too soon, the inspirational icon has caused a floodgate of tributes to pour in from across the globe.

The gentle giant was affectionately known as ‘Inga the Winger’ and will be remembered as an All-Time-Great who inspired both on and off the field.

A member of the Ponsonby club in Auckland, Inga played 19 tests for the All Blacks between 1991 and 1993, and later switched to play for Manu Samoa in 1996, going on to play 23 tests for his country of heritage.

Between 1993 and 1996 he had moved across to rugby league where he played more than 100 matches for Wigan in the United Kingdom. Inga also represented Samoa in Rugby League. He played two tests for Samoa at the 1995 World Cup and at the end of the 1996 Super League I, Tuigamala was named at centre in the Super League Dream Team.

Born in the village of Faleasiu in Samoa, Inga traveled to Samoa in 2009 with cousin David Tua to see how they could assist in the aftermath of the Samoa tsunami. Tuigamala eventually moved back to Samoa and opened the Plantation Boxing gym. He worked on community projects, and offered his skills and experience to assist with local boxing development. He was instrumental in the management team that led Samoa to a gold medal sweep of seven gold medals at the Pacific Games 2019.

Tuigamala’s death comes just weeks after his younger sister, Helen Verry, died due to an accident at a West Auckland church.

Inga is believed to have died from complications with his heart. He was about to launch a new video series, where he talks openly about his health struggles, and being diagnosed last year with type 2 diabetes. Always determined to turn every situation into a positive, Tuigamala launched Project ODICE (Obesity Diabetes Intervention Champion Evangelist) hoping to inspire others.

Vaaiga was known as the rugby player who was grounded in his Christian faith. In 2015, a powerful documentary by England RWC winner Jason Robinson tells how Tuigamala turned his life around when he contemplated suicide.

“I used to watch him in the dressing room and think, what is it about this guy?”

“He didn’t go out drinking, he wasn’t looking around the car park to see if anyone had a better car,.. but I didn’t have to ask him the secret of his happiness, because I knew it was his relationship with God.”

Robinson posted after hearing the news, “Absolutely heartbroken … I owe so much to this amazing man! Literally helped change my life when he came to Wigan Warriors from NZ. Sending all my love and condolences to the family at such a sad time. RIP brother.”

In 2008 Tuigamala was appointed a Member of the New Zealand Order of Merit, for services to rugby and the community. Tributes are pouring in from across the sporting world and families for Tuigamala.

“Every now and then a player comes along who touches the heart and soul of every single fan, player, coach and administrator – Inga was one of them,” writes Wigan’s Executive Director Kris Radlinksi.

The All Blacks have paid tribute to AB #900 “An icon and an inspiration. Vaaiga Tuigamala is an all time great who achieved things on and off the pitch others could only dream of.”

The Blues post that Inga was “a titan of the game, not just for the Blues Region, but across the Pacific and Globe”.