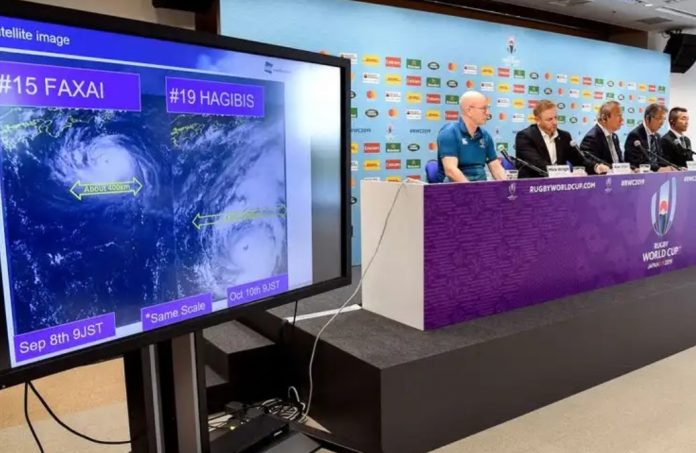 England vs. France in Yokohama and New Zealand vs. Italy in Toyota have both been declared cancelled to be considered 0-0 ties in the standings, with each team getting two points.

It is the first time matches have been canceled in Rugby World Cup history, and they will not be postponed or rescheduled. 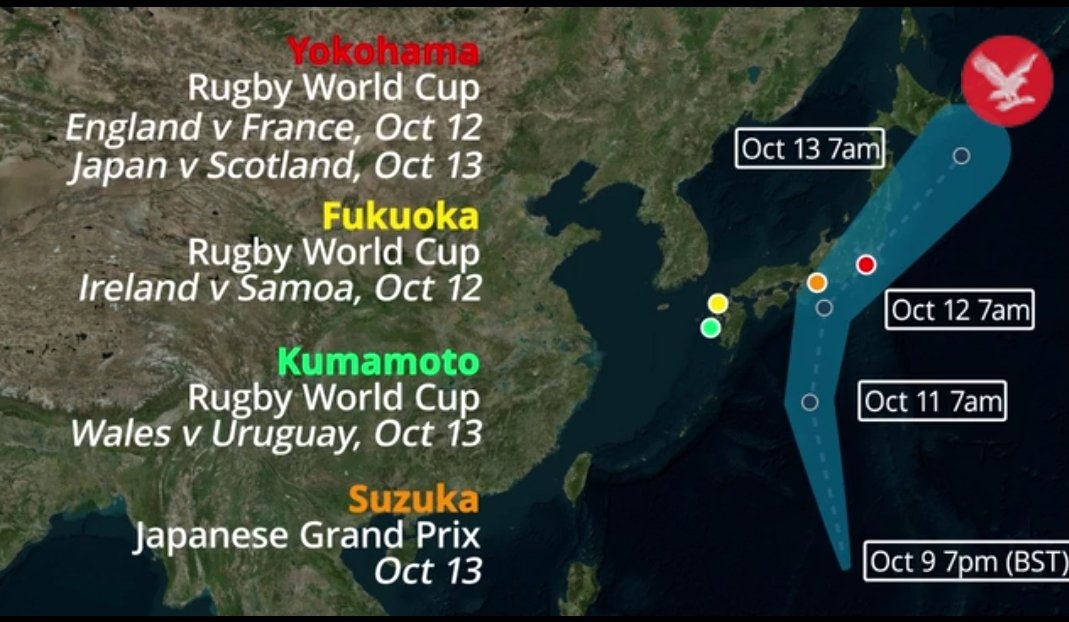 The World Rugby has issued a press release explaining the safety aspect of the decision, but does not give reasons for not rescheduling the matches.

Rugby World Cup Chief Operating Officer and Tournament Director Alan Gilpin said,  “The reason for those cancellations — an unprecedented decision for Rugby World Cup — is putting the safety first of the public, teams, tournament staff and officials and the volunteers.”

“Based on the latest detailed information from the tournament’s independent weather experts, Hagibis is predicted to be the biggest typhoon of the 2019 season and is highly likely to cause considerable disruption in the Tokyo, Yokohama and City of Toyota areas throughout Saturday, including likely public transport shutdown or disruption.”

World Rugby and the Japan Rugby 2019 Organising Committee say they have had to take the difficult decision to cancel matches and that “the impacted teams have been informed and are understanding”.

The media release repeats the safety issue in several paragraphs as below:

“It is an exceptional, complex and rapidly evolving situation and team and public safety is the number one priority. This has been central in all decision-making in partnership with the tournament’s weather information experts, host cities, venues and teams.”

“The decision to cancel matches has not been taken lightly and has been made in the best interests of public, team, tournament personnel and volunteer safety, based on expert advice and detailed weather information.”

“While we have extensively explored all options, public and team safety was our utmost priority as well as ensuring a consistent, fair and equitable outcome for all teams.”

“All fans with tickets for a cancelled match will receive a full refund for the face value of their match tickets.”

“Sunday, 13 October
• Every effort is being made to ensure Sunday’s matches will be played as scheduled. A thorough assessment of venues will take place after the typhoon has passed before a final decision is made on Sunday morning.”

“Based on the advice of government authorities and experts, World Rugby and the Japan Rugby Organising Committee are advising fans in the Tokyo, Yokohama and City of Toyota areas to stay indoors on Saturday, not to travel and to keep monitoring the official Rugby World Cup 2019 digital and social channels, including the RWC 2019 Fan Information Twitter handle @Japan2019_ENG for regular updates.”

“This is a complex and dynamic situation which we have been monitoring extremely closely with the assistance of our weather information experts. We are now in a position to accurately predict the likely impact of Typhoon Hagibis on Rugby World Cup fixtures this weekend.”

“While making every possible effort to put in place a contingency plan that would enable all of Saturday’s matches to be played, it would be grossly irresponsible to leave teams, fans, volunteers and other tournament personnel exposed during what is predicted to be a severe typhoon.

“As a result, we have taken the decision to cancel some matches in order to ensure the safety of all involved. It is the right thing to do, and comes with the support of all stakeholders, including the teams.

“We fully appreciate that England, France, New Zealand and Italy fans will be disappointed, but we trust they will appreciate that their safety must come first. They will be entitled to a full refund on their match tickets.

“Our message for all fans in Japan for Rugby World Cup is to heed all official advice, stay indoors throughout Saturday and do not attempt to travel on the day.”