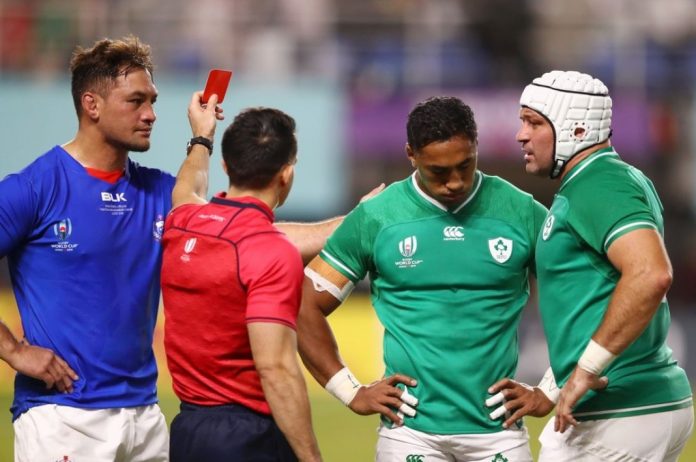 Bundee Aki will miss Ireland’s quarter final match against New Zealand after being handed down a three match suspension following the red card received for a high tackle on Samoa’s Ulupano ‘UJ’ Seuteni during Samoa’s 47-5 loss to Ireland.

A Rugby World Cup disciplinary committee upheld the decision by referee Nic Berry that the tackle was dangerous and that there were no mitigating factors to lower the penalty to a yellow. The committee started at 6 weeks and after consideration of Aki’s good track record, ended with a 3 match sanction which effectively brings the Rugby World Cup to an end for the 29 year old mid-fielder.

Born in New Zealand as Fua Leiofi Bundellu, Aki is of Samoan decent and qualifies for Ireland through residency. He played Super rugby for the Chiefs and provincial for Counties Manukau.

At the post match interview, Manu Samoa coach Vaeluaga Steve Jackson whose team has earned the most yellow cards of the 2019 tournament  insisted there was no malice in the hit and said they would do what they could to support Aki.

“I don’t know if I should comment on it,” Jackson said at the time. “It’s the mitigating factors again, whether they drop in height and those sort of things. As you all know, it’s the toss of a coin at the moment.

“Nic Berry refereed the game well. I’ve known Bundee for a long time, and what a great man he is, he’s got great character, and he doesn’t go out there to do harm to anybody.

“Hopefully the powers that be see some sense and hopefully he gets to continue on in this tournament because he’s a great kid and he deserves it as much as most.

“We’ll do everything we possibly can from a Samoan perspective to make sure that he gets on that field next week.

“Defenders have got to make decision within a split second. If you look at Bundee’s tackle again, UJ came with the ball at pace, and I think he only had two or three metres to make a decision as to what sort of tackle he might put in. That’s what they’re asking the players to do now, in a split second you’ve got to make the right decision about what sort of tackle you’re going to make, which is extremely difficult”, said Jackson.

The deicision as issued by World Rugby is published below:

Ireland centre Bundee Aki attended a disciplinary hearing on 14 October having received a red card from referee Nic Berry for an act of foul play in Ireland’s Rugby World Cup 2019 Pool A match against Samoa on 12 October.

The player sought to overturn the red card. Having considered all the angles of the incident, together with evidence from the player and his representatives, the committee upheld the decision of the referee.

The committee considered the High Tackle Sanction Framework and decided the following:

Therefore, on the balance of probabilities, the committee did not find that the referee’s decision was wrong and the red card was upheld.

Given the above outcomes, the committee applied World Rugby’s mandatory minimum mid-range entry point, which was introduced in 2017 to protect player welfare, deter high contact and prevent head injuries. This resulted in a starting point of a six-week suspension.

Taking into account the mitigating factors that are considered in relation to sanction, including the player’s good disciplinary record, the committee reduced the six-week entry point by the maximum permitted three weeks, resulting in a sanction of three weeks, which equates to three matches in the context of Rugby World Cup 2019.

Aki will miss Ireland’s quarter-final against New Zealand on 19 October, the semi-final and final of Rugby World Cup 2019 should Ireland qualify or should Ireland not qualify for these games, the player’s next club match or matches with Connacht in the PRO14 on his return from international duty.

The short form decision is here and the full written decision can be read here when available.