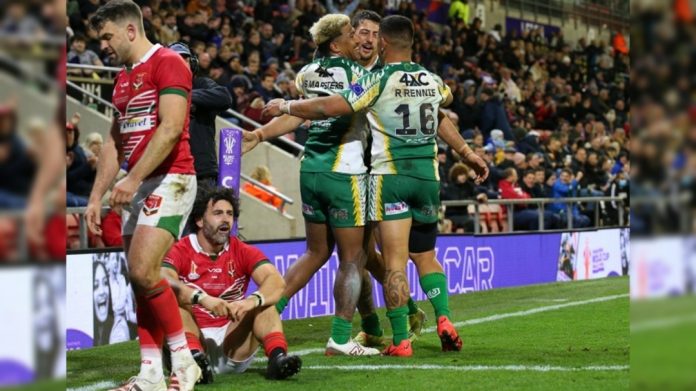 Source: By Kelsey Hogan, nrl.com. The Cook Islands overcame an early scare from a valiant Wales outfit to come away with an 18-12 victory at Leigh Sports Village Stadium.

After several missed opportunities early in the match, the Kukis trailed by four points at half-time, but South Sydney young gun Davvy Moale stepped up on his Test debut to ignite the Cook Islands’ second half charge.

For a side who haven’t won a World Cup match in 22 years and featured no players from the NRL, Wales stood tall in their defeat, producing a classy performance on the world stage.

Come the 26th minute and it was Wales taking the lead again when five-eighth Ollie Olds finished off some great lead-up work by Ralph to crash over the line from close range.

An offside penalty against Wales on the stroke of halftime gave the Kukis an opportunity to reduce the deficit and Steven Marsters slotted the ball to make it 12-8 at the break.

After a closely contested start to the second half, it was going to take a piece of individual brilliance to hand Cook Island the lead.

And it was Rabbitohs young gun Davvy Moale who delivered for the Kukis, barging through from close range before carrying several defenders over the line to score.

Wales lack of big-game experience began to show with the Kukis going back-to-back in three minutes when interchange forward Brad Takairangi produced a deft kick to the sideline and Steven Marsters outjumped Rhys Williams and scored on the turn.

The next assignment for Wales is against Mate Ma’a Tonga, at Totally Wicked Stadium in St Helen’s on October 25 (5.30am AEDT) while Cook Islands face Papua New Guinea the following day in Warrington (5.30 am AEDT).